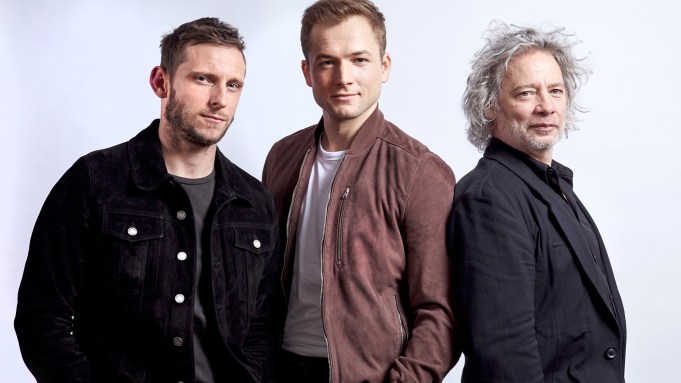 After the surprise success last year of Bohemian Rhapsody, when he stepped up as a last-minute stand-in for exiting director Bryan Singer, Dexter Fletcher is getting go-round with Rocketman. A musical fantasy based on the tempestuous life and times of Elton John, the Paramount film stars Taron Egerton as the rock icon, who won battles with his addictions and even his own parents to make it to the top — and stay there.

Fletcher brought Egerton and cast member Jamie Bell, who plays John’s regular songwriter Bernie Taupin, to Deadline’s recent The Contenders London event. “The idea was first presented to me in 2016,” Egerton said onstage at the Ham Yard hotel, “when Matthew [Vaughn] and I were making a film called Kingsman: The Golden Circle, and I very immediately felt very excited. I had a very keen feeling that it was something I could do something with, knowing what I know about Elton John — one, that he had this kind of very extrovert nature, but also has this real vulnerability to him that’s very apparent. Then also, I knew enough about the turbulence of his life to be excited by that.”

For the director, the film came with its own set of challenges, mainly how to whittle down a whole lifetime’s worth of music to fit a two-hour biopic. “I had a lot of fun figuring out,” said Fletcher. “I mean, it wasn’t always easy. What I was determined to do was have each number have its own very definite, individual feel to it, and so the staging of them became really sort of key, in terms of what it was trying to achieve emotionally, and what it was telling us about the character and where the story was going.”