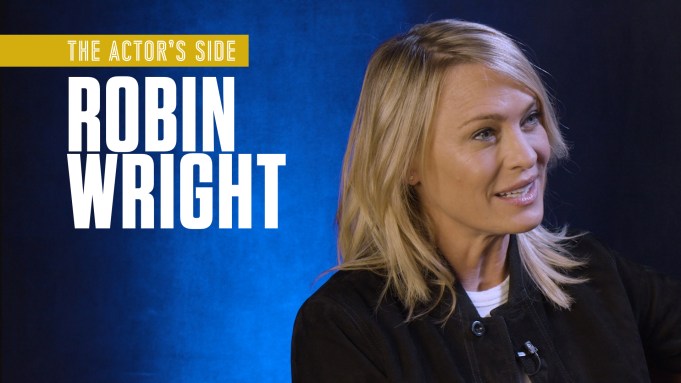 It wasn’t easy, but as Robin Wright explained when she visited our studios to tape this week’s episode of my Deadline video series The Actor’s Side it was important to keep House of Cards going after the whole Kevin Spacey debacle to give closure to the fans who have stuck with the Netflix series through all these seasons. Wright has been Emmy nominated five times as Outstanding Lead Actress in a Drama Series, as well as twice as a producer on House of Cards. She also became the first performer ever to win a Golden Globe for a streaming TV series.

In our wide-ranging interview she talks about how it was set up at the end season five anyway to go in her character Claire Underwood’s direction as she became President, as well as the crazy twists and turns the series would take. She talks about directing several episodes herself including the all-important final one, why the show always seemed to operate on the level of an Opera or Shakespearean play, plus what she learned from playing President that also has relevance in her own life as an actor. In terms of the real current president, she talks about the remarkable situation of being “trumped by Trump” in terms of incredulous story developments as she tells me “he kept doing things we had already shot six months earlier(!)”

Wright discusses how she came to the role on the promise of its original director, David Fincher that it would be revolutionary in many aspects, including the fact that it was first in for Netflix and the whole streaming model. We also talk about the never-ending fan love for one of her early films, The Princess Bride, how it took years for her to see just how iconic it was, and whether there could ever be a sequel showing Buttercup in later years. We also talk about her inspiring and kickass role in Wonder Woman and its upcoming sequel Wonder Woman 1984 and why it also might be a teaching moment for boys too. To watch our conversation just click on the link above.

To see past episodes of The Actor’s Side, click here.