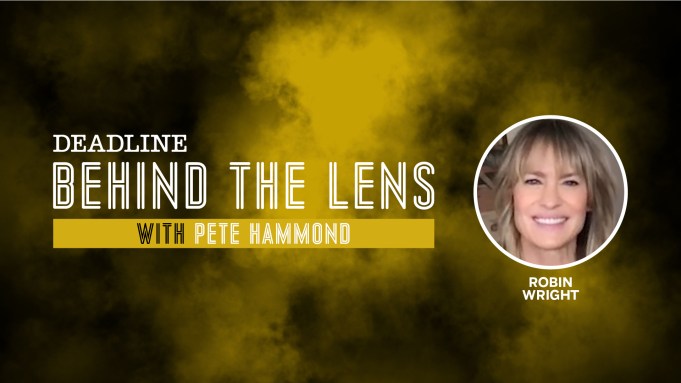 Robin Wright may best be know for her acting skills, but increasingly she is becoming a major force behind the scenes as well. Today she joins me on this week’s edition of my Deadline video series Behind the Lens where we discuss Land, her latest project and her feature directorial debut.

The Focus Features movie will have its world premiere on Sunday at the Sundance Film Festival and I can’t think of a more appropriate venue, even virtually, for this riveting and moving film that Wright tells me she made as an antidote to all the ugliness in the world for the past few years — or at least as she says since 2016 — as well as a spate of mass shootings that  affected her and inspired her to take on this film.

Wright talks about the financial realities of making independent films, and the reason she decided to star in it herself even though that was not the initial plan. She plays a woman devastated by an unspeakable family tragedy who in her immense grief gives up her life to move to a remote cabin on top of a mountain where she must learn to survive in the wilderness, or die. It is an intense role, and Wright plays it magnificently, but it is even more impressive considering she is also directing herself.

For Wright, the director’s chair is not new, as she also helmed 10 episodes of her hit Netflix series House Of Cards, and she tells me how that experience informed this one. She also talks about the increasing presence of women behind the camera and how far they have come, how far they have to go, as well as many other aspects of the business.