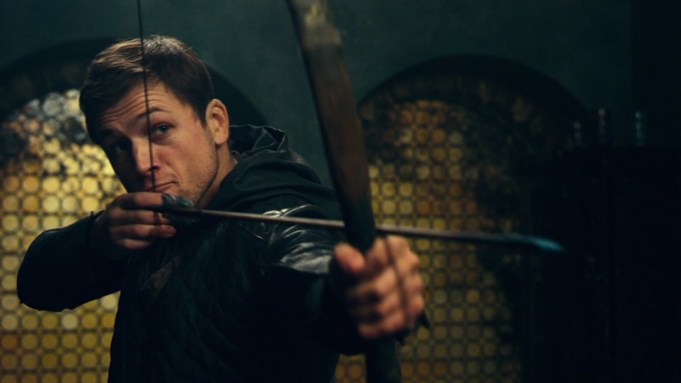 Let’s face it, Robin Hood has been around in cinematic form since the beginning of movies. Many a male star has tried it to varying degrees of success at one time or another: Douglas Fairbanks, Errol Flynn, Kevin Costner, Russell Crowe, Richard Todd and on and on. We’ve seen the light side with a Mel Brooks takeoff, and attempts by John Cleese and Cary Elwes. Even Frank Sinatra contemporized the legend in the 1964 musical Robin and the Seven Hoods.

Even though he didn’t direct this one, I think we have Guy Ritchie to blame for the latest take, Robin Hood, which attempts to make a hard-charging, fast-moving version for the attention-deficited generation that likes its entertainment at top speed. Think of Ritchie’s modern sensibilities put into past period reboots of Sherlock Holmes, and the abysmal King Arthur: Legend of the Sword  — the latter a resounding failure you might have thought would have put the nail in the coffin of any similar attempts to update our literary and cinematic heroes of olde. I guess Ritchie was busy this time around, so we get Peaky Blinders helmer Otto Bathurst to steer this version of the anarchist who loved to take from the rich and give to the poor.

Taron Egerton is our new Robin, and I’m sorry but he doesn’t fit my idea of this guy, all decked out in a hoody and even resorting at one point to wearing a mask to do his dirty good deeds, coming off more like Zorro than anyone else; Egerton fares more believably in the Kingsman movies than he does in this period garb.

This new action flick ramps up the battles, speeds up the arrows, gets all fast and furious with horse-drawn chases, and lets it rip, Ritchie-style. Plotwise, however, this rockin’ Robin is more than a little convoluted. He’s down and depressed and disillusioned by his time in the Crusades. He also basically lost his love of his life, Marian (Eve Hewson), who didn’t wait for him and instead hooks up with Nottingham community activist Will Scarlet (Jamie Dornan), a strong voice for the poor who soon finds himself competing with Robin on personal and professional fronts. That is because Robin, after doing a good deed and saving the son of a previous enemy Moor now going by the name John (Jamie Foxx), teams up with him to infiltrate the crooked government of Nottingham, particularly the greedy  operations of its immoral and slippery Sheriff (a wonderfully slimy Ben Mendelsohn, stealing every scene). This is where the Lord of Loxley, aka Robin — now masked and going by the moniker of the Hood — does his best impression of Bruce Wayne turning into Batman. The town needs a hero and he tries to fit the bill by cooking the books and taking the money to spread to those in need.

It all goes on from there, but the sheer frenetic pace and visual pizzazz can’t make up for a less than compelling tale, or a real reason to revisit the character — at least in this incarnation. This is not to say some of it isn’t fun; it’s passable in its own way, if instantly forgettable. I did enjoy the bow-and-arrow training session John gives to Robin, as well as the reinvented teeming metropolis of Nottingham, now divided straight down the middle by class and wealth distinctions. And Mendelsohn is a hoot to watch, knowing just how to deliver the dialogue he is handed. Tim Minchin as Friar Tuck is also a nice addition to lighten up the tone, and there’s also F. Murray Abraham strutting about as the Cardinal to add some gravitas. Ben Chandler and David James Kelly did the script, which neatly sets itself up for an obvious sequel that likely will never happen.

Do you plan to see Robin Hood? Check out my video review above and let us know what you think.