Continue to Deadline SKIP AD
You will be redirected back to your article in seconds
Skip to main content
June 8, 2021 9:00am 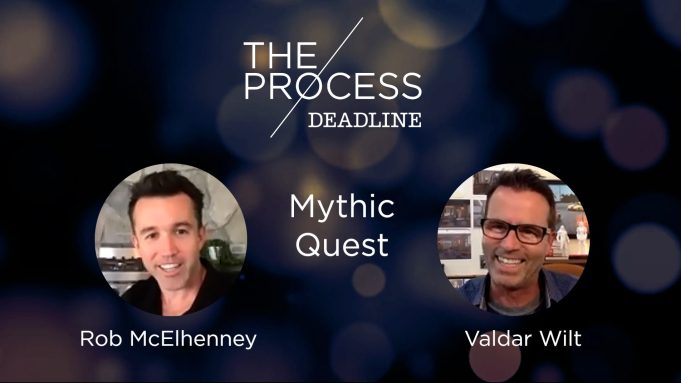 When production designer Valdar Wilt joined the crew of Mythic Quest last year, he found a “great, collaborative environment” which allowed him to do his best work yet.

In the latest installment of The Process, Wilt sits down for a virtual conversation with Rob McElhenney, the Apple TV+ comedy’s creator, EP and star, to shed light on the nature of their collaboration, and further explain why he considers the show to be “the gold standard.”

Co-created by Megan Ganz and Charlie Day, Mythic Quest centers on Ian Grimm (McElhenney), the owner of a successful video game studio, who struggles to keep his hit game of the same name on top, in concert with the dysfunctional family that makes up his staff.

Wilt’s entrée into the world of Mythic Quest came with a pair of special episodes he designed for the tail end of Season 1, titled “Quarantine” and “Everlight.” He’d subsequently go on to collaborate with McElhenney on all of Season 2, completing all of his work amidst the Covid-19 pandemic.

The duo’s conversation on The Process focuses in part on “Backstory!”, a piece set in ’70s L.A., which delves into the origin story of Mythic Quest’s head writer, C.W. Longbottom (F. Murray Abraham). But the bulk of the conversation goes to “Everlight,” the episode in which the Mythic Quest team returns to the studio for their annual costume party.

The challenge inherent to this story was that it called for multiple transformations of the show’s standing office set. For the purposes of the costume party, it needed to be turned into a magical forest, that was still clearly anchored in the reality of the show. Then, toward the end of the episode, it needed to be overhauled for a full-on, “Lord of the Rings-style” fantasy sequence, which sees Ian and his coworkers Poppy (Charlotte Nicdao) and Brad (Danny Pudi) enter fully into a space of imagination.

“I have to say that never in my entire career have I ever seen an art department do what the [Mythic Quest] team do for that particular episode,” McElhenney tells Wilt. “It was astonishing.”

Wilt then goes on to give credit to all the artists in his department and others, who worked together to execute the vision for the episode. “It’s phenomenal, what they did. They actually exceeded my expectations with their work,” he admits. “That’s pretty rare, that what we’ve conceptualized gets bested in the end. So, that was extraordinary, to see that all finished.”

Of course, while McElhenney and Wilt couldn’t be more proud of “Everlight”, the episode did not coalesce overnight. Truthfully, Wilt came to find, at the start, that his visual concepts for it were far removed from what McElhenney had in mind. As McElhenney explains, though, all great works of art are achieved through “a lot of iteration”—and it was through the meeting of minds that “Everlight” became greater than anything he could have come up with alone.

A motto the series’ creator adopted on It’s Always Sunny in Philadelphia, that has helped him get to this point of creative cohesion with his collaborators, is “Get it wrong faster.” By this, he means it’s best to present ideas quickly as possible, so that the process of iteration can begin. On the series he’s created, he’s found this idea to be applicable to each and every creative department, from the writers’ room on.

“What I always try to get people to do is to recognize that I’m willing to make a mistake, and to be wrong at any given moment,” McElhenney says. “I ask you to do the same thing. Let’s see what you’ve got as quickly as possible, and then we can iterate and get to our true collaboration a little bit more quickly.”

McElhenney later told Wilt that he knows how challenging the work of a production designer is. While he considers the work of the art department magical, he also knows that it is not magic. “You make it seem so easy that if you’re not paying attention and you’re in my position…you might not realize that this is not effortless. [But] what [the art department does] is not the work of magicians,” he says. “It’s the work of skilled artisans, putting in 20-hour days sometimes to get it done, and I just want to let you know that I recognize that. I see that, and I hope that we all express that to you as much as possible.”

“I know you see it because you’re there early in the morning working hard, too, and we all appreciate that,” Wilt responds. “It’s great to be working for somebody that does recognize the amount of work that goes into it, and you get the best out of us. You really do.”

On The Process, the collaborators also discuss Wilt’s first entertainment gig on the set of Rutger Hauer pic Blind Fury, his “uncommon path” in the industry, which began in the construction department, production designer Carl Meyer’s role in guiding Wilt through the early stages of his career and more.

Check out the entire conversation above.