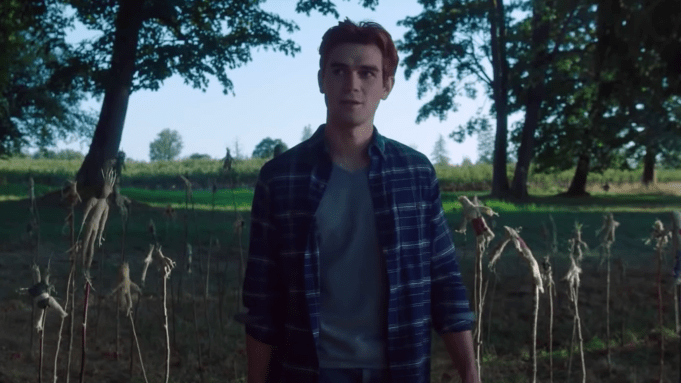 On the heels of its explosive Season 5 finale, Riverdale is back for a sixth season filled with sinister forces, steamy romances and familiar teenage witch.

The CW unveiled the trailer for the teen drama’s sixth season on Tuesday. The clip kicks off with an ominous field decorated with voodoo-like dolls.

“This is Cheryl, it’s gotta be,” Kj Apa’s Archie claims.

The pre-October trailer provides plenty of spooks as Cheryl (Madelaine Petsch) assembles her own coven of witches to carry out a curse on Riverdale. The Season 5 finale saw Cheryl learn about her ancestor Abigail Blossom’s death at the hands of Archie, Jughead and Betty’s predecessors in the 1800s. At the end of Season 5, Cheryl recited her ancestor’s curse on the town, unleashing an ominous energy throughout Riverdale.

The clip also seems to reveal that both Archie and Betty (Lili Reinhart) survive the bomb planted by  the now-exiled Hiram Lodge (Mark Consuelos), meaning they can now take their relationship to new levels.

“There is nothing more than I want than to have your baby,” Reinhart’s Betty tells Archie.

Tensions also seem to rise between Veronica (Camila Mendes) and Reggie (Charles Melton). Lastly the the teaser provides fans with a glimpse of a new face in town – Sabrina Spellman (Kiernan Shipka).

Riverdale is set to return for Season 6 with a five-episode event on November 16. The CW is series based on the characters from Archie Comics. Riverdale is produced by Warner Bros. Television and CBS Television Studios, in association with Berlanti Productions.