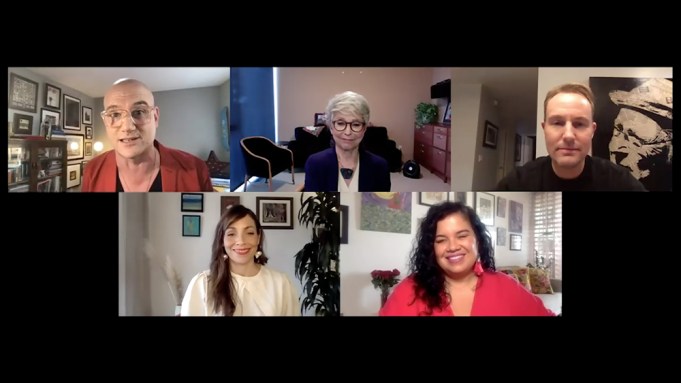 “I made a promise to myself that if I was going to do this …I really have to be as truthful as I can, or why bother?” says Rita Moreno of the new very up-close and personal documentary on her life and career premiering today at the semi-virtual Sundance Film Festival. “I really meant that, and I kept the promise to myself,” EGOT winner added.

“But I’m not happy about the no make-up stuff, I’m an actress after all” Moreno joked while talking to me in Deadline’s Virtual Sundance Studio.

Directed by Mariem Perez Riera, Rita Moreno: Just A Girl Who Decided To Go For It hits the highs but distinctly doesn’t avoid the lows, both professional and personal of the West Side Story actress’ seven-decade career. Looking at the discrimination and sexism the Puerto Rican born Moreno faced from her early days in 1950s Hollywood, the docu also spotlights her relationships, troubled marriage and activism too. Long story short – this is no “clip reel,” to quote producer Brent Miller, to put it mildly.

“I feel that the documentary shows how she finally, in this past ten years, she finally became who she really is,” says Riera of the film and the evolution of its superstar subject. “She doesn’t have a facade anymore, she is who she is. I hope the documentary inspires everyone, not only women or immigrants, everyone to become who they really want to be.”

One Day at A Time star Moreno and Riera were joined today in our studio by producer Miller and fellow producer Ilia Velez-Davilla. You can see out conversation by click on the video above.

Executive produced by Norman Lear and Lin-Manuel Miranda, among others, Rita Moreno: Just A Girl Who Decided To Go For It is set to air on PBS’ American Masters later this year and is looking for a theatrical distributor out of Sundance.