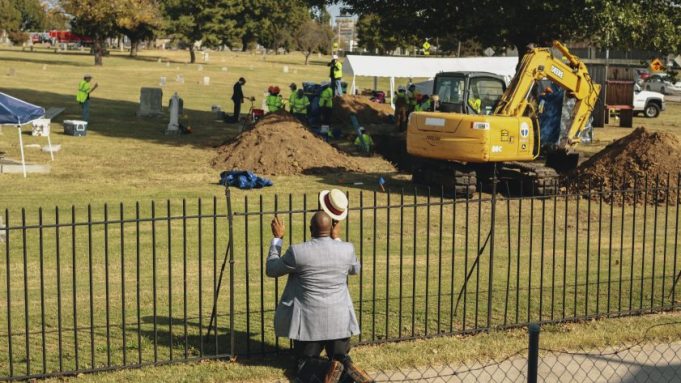 EXCLUSIVE: One hundred years have passed since a white mob attacked the prosperous African-American neighborhood of Greenwood in Tulsa, Oklahoma, burning it to the ground and killing as many as 300 Black people.

Despite the passage of a century, it has only been recently that even a limited reckoning with the Tulsa Race Massacre has occurred. Last week, excavation of a Black potter’s field within the Oaklawn Cemetery in Tulsa revealed evidence of 15 graves that may contain remains of massacre victims. But it required a long struggle just convincing Tulsa city officials to permit digs in search of victims of one of the worst spasms of racial violence in American history.

The Tulsa Massacre, and a slew of outrages like it, are explored in the documentary Rise Again: Tulsa and the Red Summer, directed by Dawn Porter and produced by Porter’s Trilogy Films and Trailblazer Studios, in association with National Geographic Studios. The film premieres Friday on National Geographic and becomes available for streaming on Hulu the next day, Saturday, June 19, Juneteenth, the holiday commemorating the day in 1865 when enslaved Black people in Texas belatedly learned of their emancipation.

The film closely follows the Washington Post’s DeNeen Brown as she reports on the Tulsa Massacre, the search for mass graves, and the fraught subject of reparations for the hideous crime that occurred.

“[The film] was internally developed at Nat Geo Studios,” executive producer Ashleigh Di Tonto, SVP of development at Trailblazer Studios, tells Deadline. “Things moved quickly after [NatGeo’s] Chris Weber attached Dawn and then asked us to come on board. Dawn, DeNeen and I came up with a brief treatment to get the official network greenlight and from there, Dawn and her team at Trilogy launched into production with our support while our post/sound team connected with them to iron out schedule, communication, remote-workflow and tech.”

The documentary places the Tulsa horror in the context of the “Red Summer,” a period of years after the end of World War I when white supremacist-led mob violence erupted in Texas, Arkansas, Tennessee, Washington, D.C., Chicago, and other cities and towns. The History Channel, CNN, and PBS are among the networks that aired documentaries timed to the 100th anniversary of the Tulsa Massacre. Di Tonto praises the approach to the subject taken in Rise Again.

“Knowing there would be several Tulsa docs, and that they’d all have something important to share, I think what impresses me the most about this film is the holistic context in which we tell the story of Greenwood,” Di Tonto says. “Detailing the tragedies of Red Summer is so important to understanding how the 1921 Tulsa Race Massacre could happen AND be erased from history.”

In the exclusive clip above, DeNeen Brown describes the effort to locate mass graves of Tulsa Massacre victims, a process that ramped up in October of last year.

Rise Again: Tulsa and the Red Summer is directed and produced by Dawn Porter, with DeNeen Brown as contributing reporter and Lauren Capps as story producer. For Trailblazer Studios, Jeff Lanter and Ashleigh Di Tonto are executive producers. For National Geographic, Christine Weber is executive producer, and Courtney Monroe is president, Content.