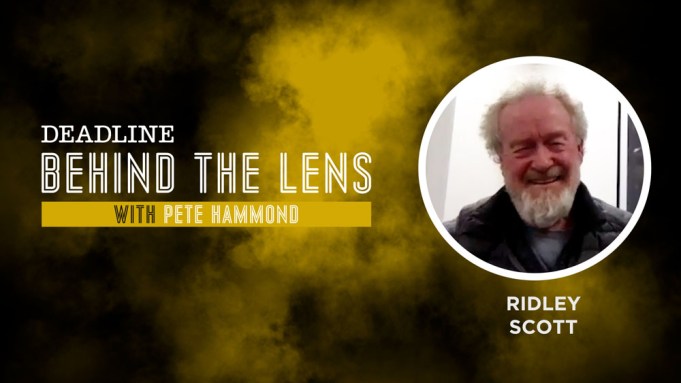 Ridley Scott just turned 84 years old on November 30 and he must be slowing down. He only had two, count ’em, two major, star-laden, big-scale movies he directed that were released this fall: House of Gucci and The Last Duel. Oh, and he has already prepped, storyboarded and cast his next massive epic about Napoleon and Josephine tentatively titled Kitbag and starring Joaquin Phoenix and Jodie Comer. It starts shooting right near the start of the new year in France (Covid permitting, but that has not stopped Scott, who made both the above mentioned 2021 films in the midst of the pandemic).

As he told me when I spoke with him for this week’s episode of my Deadline video series Behind the Lens, this new film will have just six major battle sequences as opposed to only one in some past films based on the historical figure. As you might recall, none other than Stanley Kubrick was planning a Napoleon film that just never got off the ground, but that is almost never the case with Scott, who also has a new sequel to his 2000 Best Picture Oscar winner Gladiator, and another chapter in the Alien saga in the pipeline.

Oh, and Scott with his Scott Free Productions is also a prodigious producer of television and movie projects he doesn’t direct, and if you haven’t seen its terrific spinoff to The Good Wife series, just go over to Paramount+ and check out The Good Fight, which is currently nominated for several Critics Choice Awards, as is House of Gucci which snagged Lead Actress for Lady Gaga and Supporting Actor for Jared Leto among others and is a significant box office success among the very fragile adult audience who have been most reluctant to return to the movies. Scott is also a producer on the upcoming February release (finally) of Kenneth Branagh’s Death on the Nile, and Scott Free has a new take on The Boston Strangler now in production starring Keira Knightley and Carrie Coon.

Click on the viceo above above to hear our conversation and go ‘behind the lens’ for all things Ridley Scott, an unstoppable force in the industry who, believe it or not, didn’t even direct his first movie, The Duellists, until he was 40. He has certainly wasted no time since then, with 27 features in the can he helmed, among them Blade Runner, Alien, Thelma and Louise, Blackhawk Down, Gladiator, The Martian, American Gangster, Kingdom of Heaven, Hannibal and numerous others including 2017’s All the Money in the World, for which he had finished but then had to replace a scandal-laden Kevin Spacey by taking his completed performance entirely out of the film and replacing him with Christopher Plummer as J. Paul Getty (Plummer earned a Best Supporting Actor Oscar nomination in the process). For Scott, you get the impression this was not a big problem at all.

Join me each Friday during Oscar season for another episode of Behind the Lens.