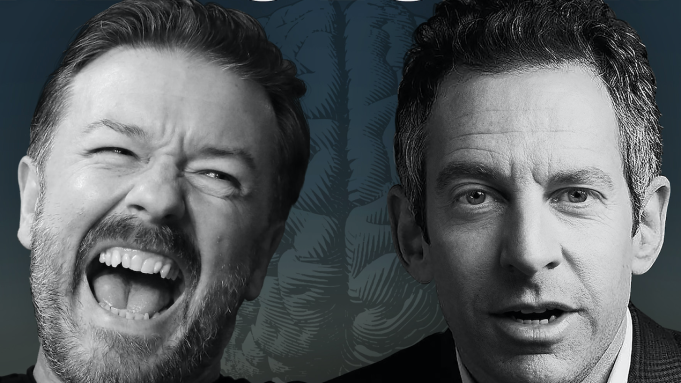 EXCLUSIVE: What are dreams for? What noise does a monster make? When does a baby start thinking? Why do you think we fear death?

These are some of the questions that Ricky Gervais, the creator of The Office, asks his friend, neuroscientist and philosopher Sam Harris on his new podcast.

Gervais is launching Absolutely Mental, a paid-for podcast series, on May 10.

The comedian was one of the pioneers of the podcast format. Gervais, Stephen Merchant, the co-creator of The Office, and Karl Pilkington, launched The Ricky Gervais Show, based on their XFM radio show, as a podcast in 2005 and in 2007, it was named the world’s most downloaded podcast. It was later turned into a TV series for HBO.

Absolutely Mental, which will feature 11 episodes, all available at launch, that will cost $14.99. The episodes, available from AbsolutelyMental.com, will be between 30-40minutes long and listeners will be able to air them on their podcast players.

The show will see Gervais phone his favorite smart friend, Harris, to ask some very important questions… and some not-so-important ones. Throughout this series, Gervais and Harris contemplate the wonders of science and the chaos of modern life, while having many good laughs. Some topics include dreams, free will, death, the robot apocalypse, bears, the perils of celebrity and the future of comedy.

Harris is the host of the popular Making Sense podcast and the creator of the Waking Up meditation app. He holds a degree in philosophy from Stanford University and a Ph.D. in neuroscience from UCLA.

Last year, Gervais struck an overall deal with Netflix, where he is currently making a third season of comedy After Life.

Gervais told Deadline, “These aren’t academic lectures. They are casual chats about how it feels to be human. Evolution, the mind body problem, spirituality, morality, mortality, the pursuit of happiness, and free speech. And by ‘free’, I mean $14.99.”