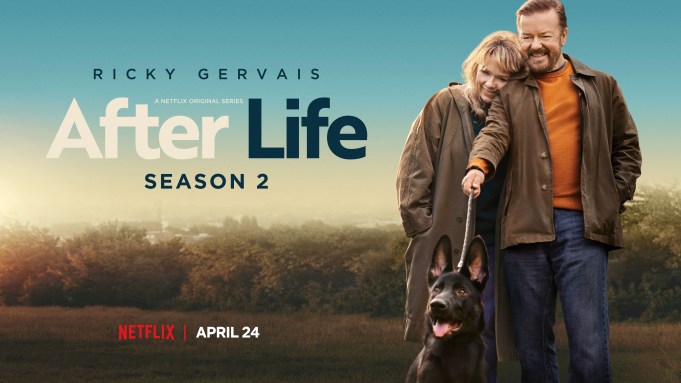 Ricky Gervais is exploring what comes next. No, not after his Golden Globes hosting. For the second season of his Netflix series, After Life, which returns on April 24.

Set in the small, fictitious town of Tambury, the comedy-drama series follows Tony (Gervais), a writer for the local newspaper whose life is upended after his wife dies from cancer.

In series 2, Tony tries to become a better friend to those around him while still struggling with his own grief. Each character is grappling with their own problems and that’s only intensified by the looming threat of the local newspaper being shut down.

After Life is a Netflix original series from Derek Productions. The six-part series is created, written and directed by Gervais. Charlie Hanson is producer and Gervais and Duncan Hayes are executive producers.

:”I was blown away by the reaction to season one,” said Gervais. “I’ve never experienced anything quite like it! It’s been truly heart-warming to see how the show has resonated with so many viewers on an emotional level. I can’t wait for everyone to see season 2 where hope is everything”