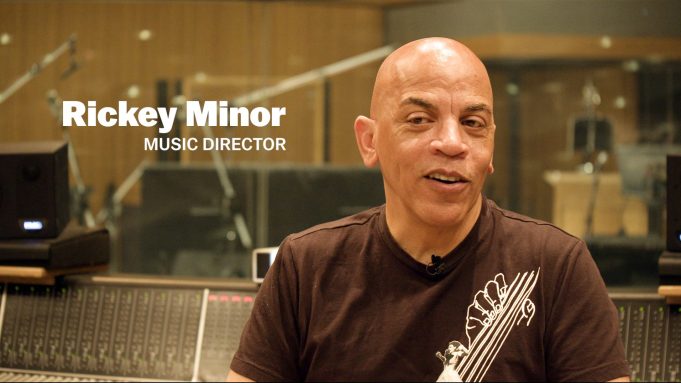 A music director, composer, producer and nine-time Emmy nominee who took home his first statuette in 2017, Rickey Minor is back in the running this season with a pair of nominations, recognizing his music direction of The Oscars and Aretha! A Grammy Celebration for the Queen of Soul.

Over the years, Minor has worked with dozens of the most iconic recording artists in the world, including Whitney Houston, Adele, Rihanna, Diana Ross, Sting, Stevie Wonder, John Legend, Gladys Knight, Ray Charles, Jennifer Hudson, Elton John, Beyoncé and so many more. Yet for the artist—who sat down with Deadline at Capitol Records for the latest installment of the Production Value Video Series—there is perhaps no talent more special, or more unique, than Aretha Franklin herself.

“The Aretha! special was not just a special; it was special for me,” Minor said. “It was like my love letter to her.”

Of course, as the Emmy-nominated music director explained, he vividly recalls the first time he met Franklin, at a time when he was working closely with Whitney Houston. “She came to the shows, but she’s the Queen, so you just don’t walk up and say, ‘Hi, Aretha.’ You kind of wait to get your audience with her,” Minor remembered. “So, I was waiting, and waiting, and waiting—and she left, so it didn’t happen. She came again, and I said, ‘Hello, Ms. Franklin.’ And she said, ‘Hello.’ End of conversation.”

While working with Aretha was a dream for Minor, he didn’t realize at the time that this would never happen, so long as he was working with Whitney. “Because that’s like getting somebody else’s man,” he said. “If you work with Count Basie, you don’t play with Duke Ellington’s band.”

One day, though, after Minor parted ways with Houston, he got an unexpected, life-changing call. “[Aretha] said, ‘Clive Davis gave me your number, and I want some new arrangements done,’” Minor recalled. “And I’d like to work with you.”

Recalling times spent with Franklin, who passed away in 2018, Minor explained what it was that made the singer unique. Partially, it came down to her unpredictability before the mic. “She’s like Ray Charles,” he noted. “They don’t sing the same way twice.”

Besides being an extraordinary singer, though, whose voice could never be replicated, Franklin was remarkable, due to her activism, and the extent to which she put her neck on the line for others. “She was very direct in what she wanted…As a woman, and a woman of color, that had to take a deep, deep place in your heart, to pull that up and be able to stand up,” Minor observed. “That inspires me each day to be the best authentic version of myself, and that’s her gift to the world.”

With almost 30 years of experience in the entertainment industry, Minor, himself, has had an extraordinary career. Perhaps best known to viewers as musical director and bandleader on The Tonight Show with Jay Leno from 2010 to 2014, Minor has handled music direction for various superstars’ tours, also lending his talents to such high-profile series as American Idol and America’s Got Talent. Managing the “musical presentation” of The Kennedy Center Honors, The American Music Awards, The Grammys, the Emmys and the Super Bowl, Minor served as music director for The Oscars for the first time this year.

To take a look at our conversation with Minor, in which he breaks down the craft of the music director and explains why he wants to be “the thermostat, not the thermometer,” click above.