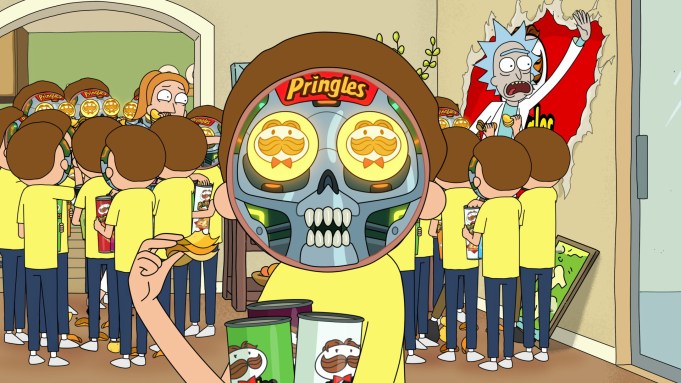 Adult Swim’s flagship Rick and Morty has been bouncing around through time and space for a while now, so it was only a matter of time before it emerged in a dimension where it would get a  Super Bowl ad. It came Tuesday, when Pringles unveiled its 30-second spot that will premiere during the second quarter of Sunday’s NFL title game on Fox.

The premise: A Pringles robot—disguised as Morty—appears overly enthusiastic about the Spicy Barbecue Pizza stack, made using Pringles Pizza, Barbeque and Jalapeno crisps. Rick immediately catches on to his grandson’s bizarrely out-of-character corporate jargon, unmasks the Mortybot and comes to the startling realization that they’re trapped inside a Pringles commercial.
Check it out above.

The idea for the ad, from Grey Group and Adult Swim, germinated from a Season 3 episode in which Rick turns himself into a pickle to avoid going to family therapy — the episode, “Pickle Rick,” earned the show the 2018 Primetime Emmy for Best Animated Series.

As part of the Super Bowl ad campaign, “Pickle Rick”-flavored Pringles are hitting store shelves in time for Sunday’s game.

The irreverent animated adult sci-fi series is in the middle of its 10-episode Season 4, part of a massive 70-episode deal that includes a long-term pact with the show’s creators Dan Harmon and Justin Roiland. The additional 70 episodes is more than Rick and Morty‘s first three seasons combined (31 episodes), and underscores the show’s outsized success not just on the Adult Swim block but across digital, gaming, live-streaming, retail, and fan experiences.

Check out the ad above.