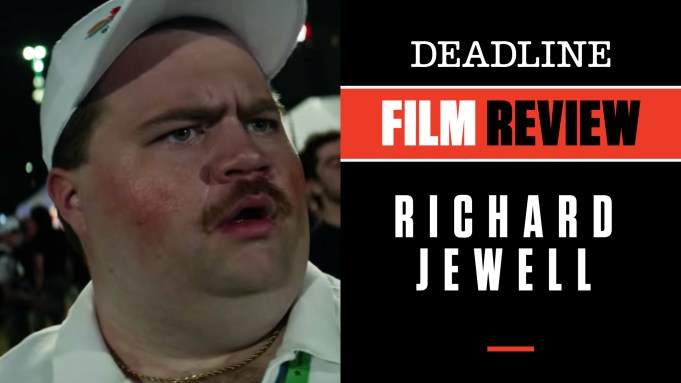 At 89, Clint Eastwood might be one of the oldest directors ever to make a major studio movie, much less one that already has made the AFI and National Board of Review Top 10 lists for 2019. But that is the case for this remarkably durable actor, producer and director who even writes the music score for most of his films (for this one he just wrote a theme that was incorporated throughout Arturo Sandoval’s score). Richard Jewell is a fascinating true account of the security guard who landed a job working at the 1996 Atlanta Summer Olympics, potentially saved many lives by notifying the FBI of a suspicious backpack in Centennial Park that turned out to be a lethal bomb, was hailed a hero, appeared on the Today show but later was targeted as a suspect in the bombing by overzealous FBI agents and scoop-hungry journalists for the local paper. For 88 days he lived under the cloud of going from hero to zero, only to be exonerated without ever being charged. (Eric Rudolph confessed to the crime six months after the fact and still sits in solitary confinement in prison).

Eastwood for years had wanted to make this story — one that finally could exonerate the late Jewell in the eyes of a public that still largely associates his name as being the Olympics bomber even though the truth is completely the opposite. If a movie has the power to make a difference and set the facts straight, then this one certainly can do that. Although it is a solidly made picture following the story in linear fashion as it unfolds, the script by Billy Ray — which was adapted from Marie Brenner’s Vanity Fair article as well as a book called Suspect — clearly makes villains of the FBI here, an irresponsible agency desperate to produce a suspect just as the 1996 Olympics are getting underway, and the Atlanta Journal-
Constitution, which was the hometown paper afraid of getting scooped on a potential story right under their nose.

Aggressive reporter Kathy Scruggs (Olivia Wilde) is shown using flirtatious methods at a bar with FBI agent Tom Shaw (Jon Hamm) in order to get information to confirm that Jewell has turned into a suspect. Did she sleep with him to get the story? It is strongly intimated that was the case. It makes both of them look unethical and is oddly timely now with the intelligence communty and the media both under attack more than they have been before. This makes nearly the quarter-century-old story take on new pertinence.

Still, this is Jewell’s movie, and Paul Walter Hauser — the actor Eastwood chose for the role — is nothing less than sensational and heartbreaking as a man who did the right thing, only to have the facts turned on him, nearly destroying his life and that of his mother Bobbi (Kathy Bates) in the process. As his lawyer Watson Bryant (Sam Rockwell), the only attorney Jewell knows, gets deeper into the case, it is apparent that Jewell is as much a victim of the Atlanta Olympic bombing as the people whose lives were changed in an instant when it happened.

As the FBI is seen using morally questionable tactics to force an admission from Jewell, and the media starts to pile on, the filmmaker and Ray’s script studiously avoid dividing this into a simple good-vs.-evil scenario. Instead they point up the flaws in humanity, the pressures on public servants to deliver a verdict without waiting for the complete truth. It has been meticulously filmed and edited (by longtime Eastwood associate Joel Cox) and is all there for the viewer to determine the facts for themselves. Interestingly the current editor-in-chief of the Atlanta Journal Constitution (who wasn’t there at the time) argued that some of the film’s assertions, including the portrayal of the now-deceased Scruggs, are untrue. Then again, the paper was culpable in targeting an innocent man in order to be first, so you can see why an editor might want to rescue the reputation of his journalists as a major motion picture is about to come out showing them in an unfavorable light.

As for the shoddy work of the FBI, the now-deceased agent in question played by Hamm has been fictionalized to represent a number of agents involved, but it is clear what he did. Neither can speak for themselves now, but then neither can Jewell, who died of heart failure in 2007. This movie is likely to be the final word for all of them, and in Richard Jewell’s case, it is long overdue.

Hauser, Bates, Hamm, Wilde and a terrific Rockwell are all great in the film, and there’s fine work as well from Nina Arianda as Nadya, Bryant’s legal assistant and now wife. Eastwood has made one of his best films yet. Imagine that. He is simply an extraordinary filmmaker.

Producers are Eastwood, Kevin Misher, Tim Moore, Jennifer Davisson, Jessica Meier, Leonardo DiCaprio and Jonah Hill (the latter two at one time were attached as actors). Warner Bros opens it on December 13. Check out my video review including scenes from the film by clicking the link above.

Do you plan to see Richard Jewell? Let us know what you think.