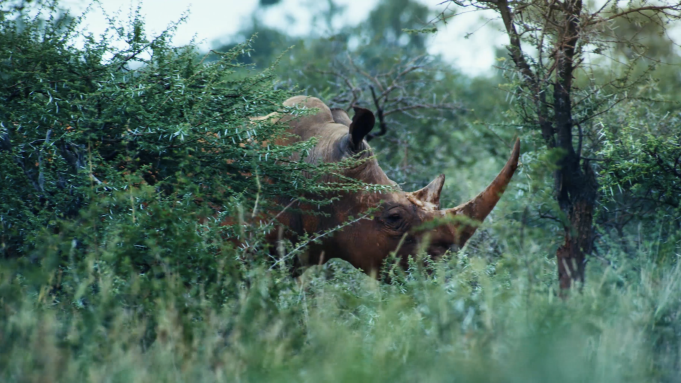 Sir Richard Branson’s new short film production, Sides of a Horn, is looking to shed light on the rhino poaching crisis that exists in South Africa. The goal is the same as the 2006 Leonardo DiCaprio movie Blood Diamond, which opened the world’s eyes to the underbelly of the diamond trade.

In fact, the 17 minute-plus short is already making waves.

Directed by British-born, LA-based filmmaker Toby Wosskow, the short follows two brothers-in-law on opposite sides of the rhino poaching argument, one a poacher and the other a game ranger. You can watch it above.

Rhino poaching is a vicious circle. Poachers receive $3K for rhino horn, enough to support their family for a year. Meanwhile, international crime syndicates will sell the same horn for $300K, using the profits to fund drug trafficking, human trafficking, and terrorism. In turn, the rhinos, who’ve survived for 50 million years, are expected to go extinct within the decade.

Wosskow came up with the idea for the short while visiting South Africa, where he witnessed the severity of the poaching crisis first hand. He reached out to Branson, who has a long history of global humanitarian work, and who inspired the filmmaker since his teenage years.

Sides of a Horn is unique in its depiction of the poaching war, in that it is sympathetic towards both sides of the struggle in communities torn apart by the conflict between poachers and rangers. Wosskow worked closely with one such community where wildlife crime was most prevalent.

Though fictional, Sides of a Horn depicts the actual dilemmas impacting South Africa’s rural communities, which are torn apart by the conflict between poachers and rangers. Poaching is connected to poverty, inequality, or corruption, and the rhinos’ suffering is closely linked to the suffering of people. As the recipient of a Mandela Washington grant, Wosskow went to Uganda this November for grassroots screenings in rural communities, where rhinos were once poached to extinction, but are now being reintroduced.

More positive global effect: The short amassed over 800K views in its first week of release in China, sparking a dialogue about China’s rhino horn consumption and the effect on the poaching war in Africa.

WildAid, African Wildlife Foundation, and Virgin Unite have been screening the film for policymakers and world-leaders in order to humanize the complex social and environmental issue.

African Wildlife Foundation CEO, Kaddu Sebunya, says about the short, “I have spent 25 years talking in circles with politicians, trying to explain the complexities of our poaching war. Now, I can show them Sides of a Horn, and 17 minutes later, we are having a productive conversation. That is the power of this film.”