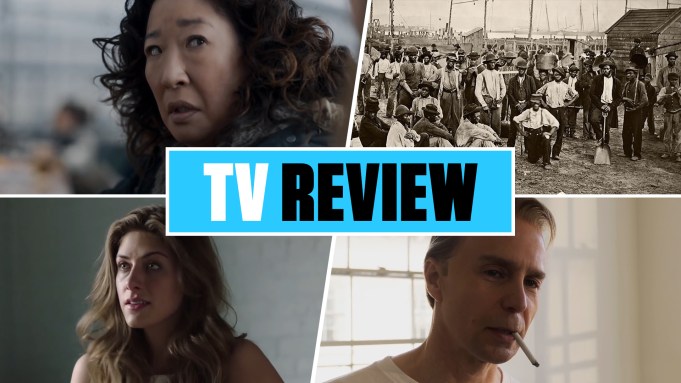 The Walking Dead has finished its latest season, The Big Bang Theory is heading towards its series finale and Game of Thrones is poised to launch its eighth and final season April 14. However, this week sees a mix of hidden history, blind justice, some fast moves and deathly thrills to pick from as the show you have to watch.

Take a look at my video review above for more.

In that vein, tonight sees the debut of dramedy In the Dark on the CW. Focusing on blind, boozy and eventually autodidactic detective Murphy, as played by Shameless alum and distinctly not-blind Perry Mattfeld, the murder mystery and guide dog-fueled series created by Corinne Kingsbury is going for a more adult approach than the home of Riverdale and the Arrowverse.

Picking up literally seconds after the sharp end of its award-winning first season, Killing Eve is back for a second season on BBC America on April 7. Golden Globe winner Sandra Oh is back as MI5 officer Eve Polastri and Jodie Comer returns as the stealthy assassin Villanelle in the Phoebe Waller-Bridge-created, European-set spy thriller. Set to be simulcast on AMC as well as BBC America, the eight-episode second season of the BAFTA-beloved show finds the obsessive soulmates of sorts still enmeshed in their deadly cat-and-mouse chase.

In a dance of a different nature, FX’s April 9-premiering Fosse/Verdon goes front of house and backstage on the tumultuous life of the extremely talented Bob Fosse and Gwen Verdon, one of the greatest talents to ever grace any stage, Broadway or otherwise. Led by Sam Rockwell and Michelle Williams, the Lin-Manuel Miranda-produced limited series based on Sam Wasson’s biography of the Cabaret director also stars The Punisher alum Kerri Barnett as the irrepressible Liza Minnelli.

The Henry Louis Gates Jr.-hosted Reconstruction: America After the Civil War that launches on PSB on April 9 seeks to shine a spotlight on a remarkable and often overlooked period of American history when the nation unsheathed its greatest ideals and worst tendencies simultaneously.

So, from that selection, one will make the cut as the show you have to watch this week. There’s only two things to do: place your bets and watch my video review above.