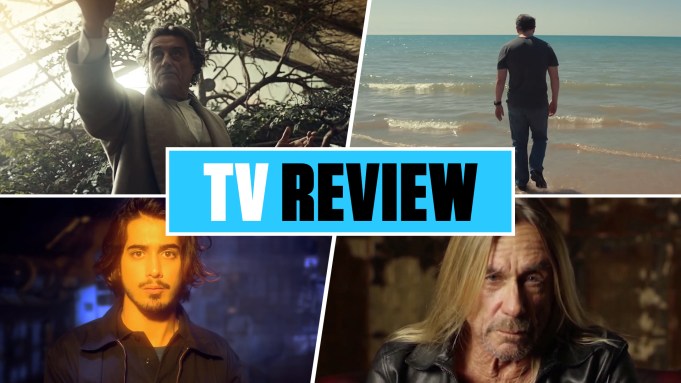 The town has barely taken a breath after the hostless Oscars, and already we are heading into the Emmys and FYC events galore. As season and series finales also explode across the small screen schedule, it may be more vital than ever to know what is the show you have to watch this week.

One thing you can say for sure is there is a lot of legacy and legends on offering with the cream of the crop this week, as you can see in my video review above.

The Office co-creator and Golden Globes host extraordinaire Ricky Gervais is back with After Life, which launches on Netflix on March 8. Created, directed and starring Gervais, the six-part dark comedy finds a shattered widower screaming at the plague of humanity and the world for the loss of his wife to cancer. Among many other turns, the series reunites Gervais with his Extras co-star Ashley Jensen, as well as co-starring Game of Thrones and Harry Potter alum David Bradley and Downton Abbey vet Penelope Wilton.

There are a lot of veterans of the culture wars and the music industry to be found in Punk, which debuts on March 11 on EPIX. Executed produced by the Godfather of Punk himself Iggy Pop and fashion designer John Varvatos, the docuseries has literally a greatest hits of the greatest musicians of the last three decades of the 20th century. From Mr. Jim Osterberg Jr. AKA Iggy, the Sex Pistols Johnny Rotten of the Sex Pistols and PiL, the MC5’s Wayne Kramer, Debbie Harry and Chris Stein of Blondie, members of Guns’n’Roses, Black Flag, Nirvana and more, Punk is packed with the A-crowd …the A being for Anarchy, of course.

March 10 sees both the premiere of Gregg Araki’s Now Apocalypse and the Season 2 start of American Gods on Starz.

Back nearly two years after its last season kicked off, the Ricky Whittle, Emily Browning, Pablo Schreiber, Crispin Glover, Orlando Jones, Yetide Badaki, Bruce Langley, Mousa Kraish, Omid Abtahi and Demore Barnes starring series based on Neil Gaiman’s award winning 2001 novel digs deep into its original source material. The eight-episode Gods Season 2 may have a new showrunner and no Gillian Anderson or Kristin Chenoweth anymore, but Ian McShane’s Mr. Wednesday is defiantly in full Odin mode this year as the war between the old and new gods heats up.

Any fan of Gregg Araki’s work on the big screen with The Doom Generation and Mysterious Skin and the small screen as a director for hire on Riverdale or 13 Reasons Why knows that heating it up is one of Cannes Film Festival Queer Palm award winner’s core skills. Created, written, directed and EP’d by Araki, the Sundance previewing and LA-set Now Apocalypse focuses on millennial tensions in a surface dominated world where all might not be what it seems at first sight.

So, from gods to loss to punk gods and a world possibly on the brink, what is the show you have to see this week? You’ll have to watch my video review above to find out – and I think you will see why when you do.