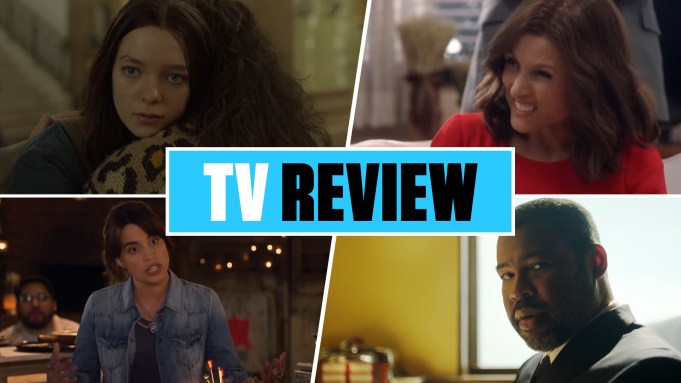 Welcome to another small screen week of not only sight and sound but of the mind, as we say goodbye to Season 9 of The Walking Dead and await the eighth and final season of Game of Thrones in just over two weeks and determine who will sit on the throne of the show you have to watch.

Which you can check out in my video review above.

First on the battlefield is NBC’s Abby’s, which debuts very soon tonight on NBC in Will &Grace’s 9:30 PM slot.

The boozy 10-episode series stars Natalie Morales as a former Marine who spins some income by opening an under the table, in more ways than one, bar in the backyard of her San Diego rental. Produced by Mike Schur and created by Josh Malmuth, the sitcom from Universal TV, Fremulon and 3 Arts also features Nelson Franklin, Kimia Behpoornia, Jessica Chaffin, Neil Flynn and Leonard Ouzts

Launching tomorrow on Amazon Prime is Hanna, with Esme Creed-Miles as the well-trained teen assassin on the run. Based on the 2011 Joe Wright helmed film of the same name, this eight-episode offering from The Night Manager screenwriter David Farr also features a The Killing reunion of sorts with Joel Kinnaman and Mireille Enos on board as well as a well armed father and a ruthless CIA officer.

In that U.S. government vein we have the return of multiple Emmy winner Veep on HBO on March 31. Julia Louis-Dreyfus is back as the profane and self-absorbed former VP and POTUS Selina Meyer, who is making one more lunge for the Oval Office she got turfed out of in Season 5. Hugh Laurie joins the ex-Seinfeld star again on the David Mandel run dark comedy as her own former backstabbing Veep. Plus, the first among shameless equals Meyers is reunited with her the true motley crew of staffers played by Anna Chlumsky, Tony Hale, Matt Walsh, Reid Scott, Kevin Dunn, Gary Cole, Timothy Simons as a Presidential hopeful of his own, Sam Richardson and Sarah Sutherland as Selina’s much harried daughter.

Back on the small screen after the well deserved success of 2017’s Get Out and the currently box office raging Us, Jordan Peele is fronting and running the April 1 premiering latest reboot of The Twilight Zone, one of the greatest TV shows ever made.

So, picture this, what is the show you have to watch this week? Well, take a look at the video to find out my friends.