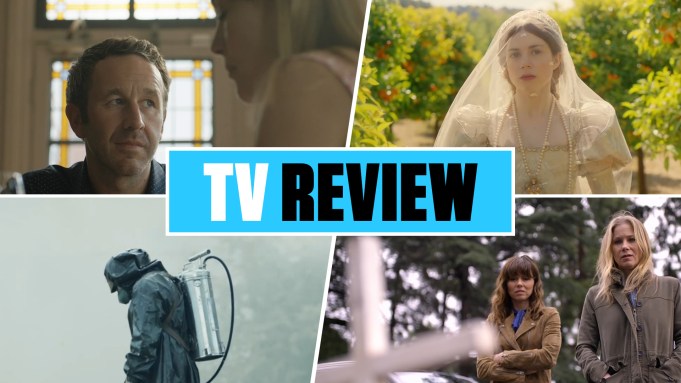 The battle for Winterfell is over it seems on Game of Thrones, but big battles loom elsewhere on the small screen this week for what will be the show you have to watch. Who is the victor? Well, take a look at my video review above to find out.

Among the contenders, in calendar order, first up is Dead to Me, which launches on Netflix tomorrow. Created by Liz Feldman, and produced by Will Farrell, Adam McKay and CBS TV Studios, the 10-episode comedy of sorts revolves around loss, as it title makes pretty obvious. Specifically, on-screen, those moves are made by stars Linda Cardelllini and Christina Applegate as two different women who become partners in grief, secrets, dance moves and more.

Next up is The Spanish Princess, debuting May 5 on Starz in the slot previously held by the recently wrapped second season of American Gods. The historical drama led by Charlotte Hope and executive produced by Colin Callender is the third series the premium cabler has aired based on Philippa Gregory’s bestselling novels. With Emma Frost and Philip K. Dick’s Electric Dreams alum Matthew Graham showrunning, this almost all-female-directed installment of the franchise focuses on Catherine of Aragon and her marriage prospects in the geopolitical moves of 16th century England.

Then there’s HBO’s Chernobyl and Sundance TV’s bite-sized State of the Union, both premiering May 6.

Clearly about the catastrophic explosion of the Soviet nuclear reactor in 1986, the HBO limited series features Marvel regular Stellan Skarsgård, plus Jared Harris, and Emily Watson. Aiming to tell the up-close real story behind the story you’ve heard about, the five-part Chernobyl is created and written by Craig Mazin and directed by Johan Renck for the WarnerMedia-owned outlet.

Having previewed at the Sundance Film Festival this year, State of the Union starring Rosamund Pike and Chris O’Dowd is a 10-episode experiment of 10 minutes each. Penned by Nick Hornby and helmed by Stephen Frears, each episode spends time down at the pub with the duo before they head off to couples therapy.

Which one of those four is the show you have to watch? As I said, watch the video review above to find out. Enjoy.