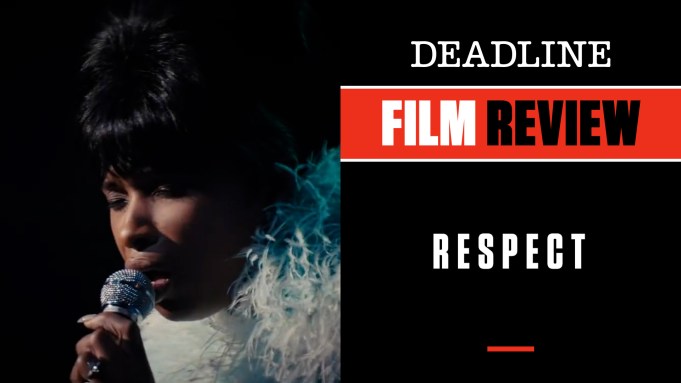 “R-E-S-P-E-C-T.” That is the name of one of Aretha Franklin’s best-known hits, and it also happens to be the word I would use to describe my admiration not only for the Queen of Soul but now also for the Oscar-winning star who portrays her in the new film that is indeed titled Respect.

No matter what flaws there are in this long-awaited and Covid-delayed film (it was supposed to open in December 2020), or arguing about what was left out or glossed over, Jennifer Hudson — who was personally selected for the role by Franklin herself shortly after the singer saw her tear up the screen in 2006’s Dreamgirls — delivers and then some, not only as you might expect in the vocal department but also with a towering dramatic performance.

Cynthia Erivo, Hudson’s The Color Purple Broadway co-star, is Emmy-nominated for playing Franklin in the Nat Geo limited series Genius: Aretha, a more all-encompassing deep dive into the entire life of the legend. But despite its star’s mighty effort, it doesn’t quite have the impact of what Hudson does here in 2½ hours. Director Liesl Tommy and screenwriter Tracey Scott Wilson wisely focus on the first part of Franklin’s rise and early triumphs in showbiz (right up to a 1972 gospel album and documentary), rather than trying to cover the waterfront. This is what works best in these biopics like the recent Elton John Rocketman, zeroing in on the tumultuous and more dramatic early years and covering the next 40 or so with a few lines over the end credits. But even though it is Aretha’s life we are watching, this treatment can’t seem to escape some of the clichés of this genre: the addictions and the male abusers present in the life it seems of so many superstar female singers in movies from Doris Day as Ruth Etting in 1955’s Love Me or Leave Me to Angela Bassett as Tina Turner in What’s Love Got to Do With It and Diana Ross and Andra Day in various versions of Billie Holiday’s ups and downs, plus many more.

Yet Aretha lived it, starting out, as the film does, by introducing us to the young wunderkind (played by Skye Dakota Turner, who also plays Tina Turner as a child in the Broadway show Tina) who sang up a storm in church and for famous friends of her domineering father Rev. C.L. Franklin. He then pushes her into the performing limelight, the first of many men trying to control her personally and professionally. Her childhood was anything but angelic; she was pregnant at age 12 with her first baby, followed by another a couple of years later but not revealing who the father might be. In mid-song Tommy switches from the young Aretha to the older teen and our first glimpse of Hudson (fairly convincingly aged down by 20 years).

Soon her career is dominated by her new love, Ted White (an effective Marlon Wayans in an unsympathetic role), who can’t help himself trying to force his new wife into the career he wants to run, even to the point of assaulting her (though not on the level of Ike and Tina). She also has her battles with her record producer Jerry Wexler (wonderfully played by Marc Maron), who eventually steers her away from New York and a surprisingly large number of generic early albums that brought no hits on the Columbia label, to recording in Muscle Shoals, Alabama, with a very hip group of uber-talented white musicians. It is there finally she finds her own voice, as played out in a terrific scene detailing the making of “The Way I Love You.” Later we see the creation of “R-E-S-P-E-C-T” and “(You Make Me Feel Like A) Natural Woman” among many others, belted out with heart and soul by Hudson, meticulously reminding us of the power of Aretha but at the same time never losing her own unique voice. It is a high-wire act the star pulls off in song after song here.

Just as important as the music is the life journey she takes in learning how to stop letting men dominate her career and as Franklin becomes not just a feminist but a fierce supporter of racial and social justice. That is evidenced by her close relationship with the man she called “Uncle Martin” as a child, Martin Luther King Jr (Gilbert Glenn Brown), and unflappable belief in controversial figures like Angela Davis. At times if feels a bit too episodic, but the film doesn’t stint on showing her traumatic union with her first husband, as well as the difficulty she has adjusting to a more healthy relationship with tour manager Ted Cunningham (Albert Jones), as well as her alcoholism that led to a very bad night onstage in Georgia.

A beacon in her life was her mother Barbara (beautifully played by Audra McDonald), who died in her early 30s but was a powerful singer and influence on her daughter well after the breakup with the philandering Rev. Franklin. Also making the most of limited screen time is Tituss Burgess as gospel icon James Cleveland, who first is seen directing the music at Rev. Franklin’s church and later lending his leadership to the recording of that gospel album Aretha insisted on doing — despite objections from her record company — that became the biggest seller of her career. Nailing her brief screen time is a scorching Mary J. Blige as fellow singer Dinah Washington, who accuses a young Aretha of stealing her signature song, as well as some fine work from Hailey Kilgore and Saycon Sengaloh as her sisters who become part of her stage act.

In the end, it is the distinct voice of Aretha herself that we see playing over much of the end credits. It is very powerful indeed,but also a reminder of just how brilliantly her casting choice did right by her. This is Jennifer Hudson’s triumph merged with the spirit and guidance from an even greater voice above. Hudson’s performance is an electrifying sight to behold.

Producers are Harvey Mason Jr., Scott Bernstein, Jonathan Glickman and Stacey Sher. MGM releases the film on Friday exclusively in theaters, which is probably the only place to do true justice to the potent voice on display in this extraordinary soundtrack. Check out my video review with scenes from the film at the link above.

Do you plan to see Respect? Let us know what you think.