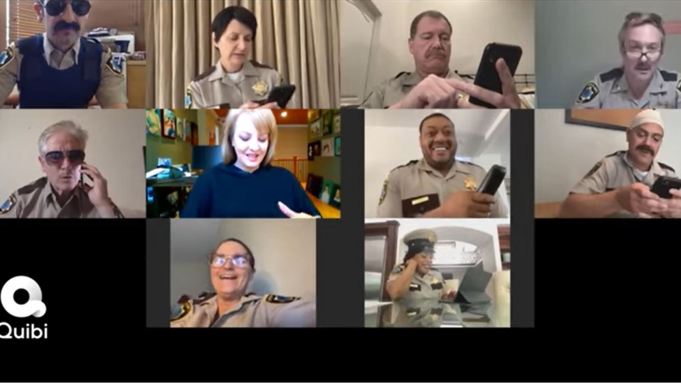 UPDATED, 8:34 AM: Quibi has set the premiere date for its shortform revival of Reno 911! and is teasing the series with videos of Zoom calls among the characters. Those familiar deputies will begin patrolling the streets anew on May 4, and while you wait, here are three virtual “Morning Briefings” with the locked-down law enforcers working from home, along with the cheeky new key art: below:

PREVIOUSLY, March 17: It’s been 11 long years since Reno 911! hung up its bulletproof vests on Comedy Central, but the deputies who police the Biggest Little City in the World are back. In littler doses. Here is our first look at Quibi’s shortform revival of the cult comedy. Watch the clip above.

The clip sees the familiar law enforcers at roll call, bantering about the squirrels in the vent above them. Everyone can hear the little critters, but are they … singing? Decide for yourself, but the gang is skeptical and begins to wonder if their lieutenant is losin’ it — and whether it’s time for “a Mice and Men” down in Primm.