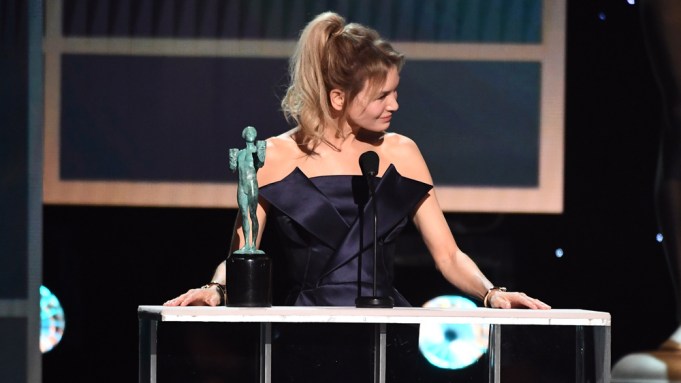 An emotional Renée Zellweger thanked her fellow actors following her SAG Awards win Sunday night for Outstanding Performance by a Female Actor in a Leading Role for Judy, as she dedicated her prize to the film’s subject, Judy Garland.

“I’m just so grateful and for the privilege of reflecting on the life of one of our own and most beloved,” Zellweger said of Garland, whom she portrayed in the Rupert Goold-directed biopic. “Judy Garland, 50 years later, your community is thinking of you tonight. This is for you.”

“Y’all have taught me so much along the way. And I’m so grateful to you, especially to my sisters,” Zellweger said, addressing her fellow acting community. “Your example inspires me. I feel so lucky to be a member of this family of storytellers who gets to do work that reflects the experience of being human and fosters understanding, and empathy and unity, and, with some luck, maybe pushes history a little bit closer to the light.”

She also gave a special thanks to former co-stars Vincent D’Onofrio, “for showing me how to work and the seriousness of work so that it can matter more,” and Tom Cruise, “for your example of professionalism on set and striving for excellence and generosity and unconditional kindness.”

You can watch Zellweger’s entire acceptance speech above.