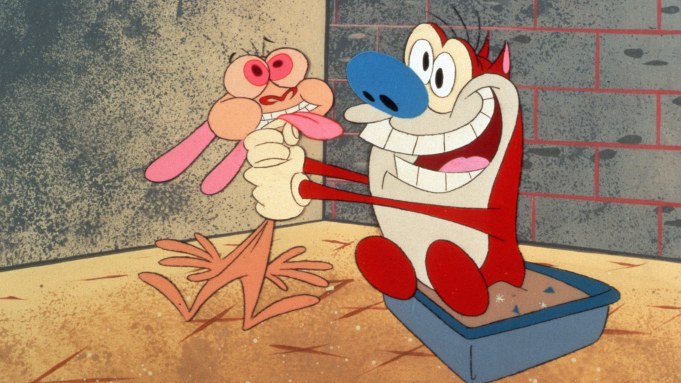 EXCLUSIVE: How to describe The Ren & Stimpy Show, that bizarre, you-had-to-be-there ’90s animated series that carved a niche for itself on the kid-friendly Nickelodeon channel without being all that kid-friendly itself? (Well, depending on what kind of kid you were…)

In this exclusive clip from the upcoming Sundance Film Festival documentary Happy Happy Joy Joy, comics (including Bobby Lee) and fans try to describe the outrageous, grotesque and very funny series in one sentence. One or two come close.

Premiering at this month’s Sundance as part of the Documentary Premieres section, Happy Happy Joy Joy (a catchphrase from the series) is co-directed by Ron Cicero and Kimo Easterwood, who set themselves the task of illuminating “the joy, beauty, and lasting impact of Ren & Stimpy” while also examining the cartoon’s creator John Kricfalusi, a man described as a brilliant animator and storyteller as well as a deeply flawed person. Press materials for the documentary say Kricfalusi “both caused and experienced trauma that deeply affected his work and relationships.”

Through archival footage, show artwork, and interviews with the artists, actors, and executives behind the show, Happy Happy Joy Joy explores what happens when “artistic genius goes awry.”

Written and directed by Cicero and Easterwood, Happy Happy Joy Joy is exec produced by Cicero, with Easterwood as director of photography. Kevin Klauber produces.

The doc will have its press and industry screening January 24 at the Park Avenue Theatre before its world premiere Tuesday, January 28 at the Library Center Theatre.

Check out the exclusive clip above.