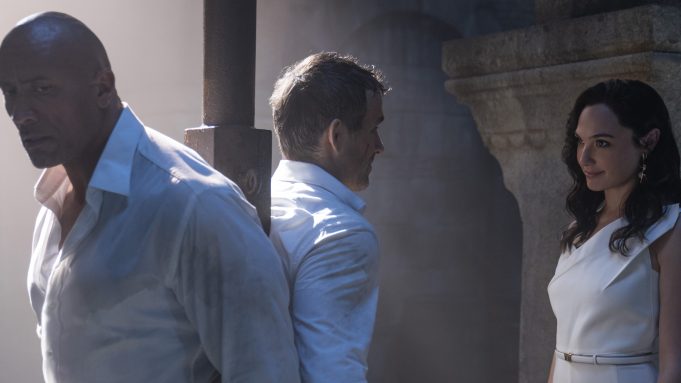 What does Booth have to say about it? “Where’d you get that jacket?” he asks the rich leather clad-Hartley.

Nearly famous last words as Johnson’s Hartley grabs Booth and hurls them both out of a window.

“You wanna arrest me? Arrest me,” says Bishop in another scene where Hartley and Booth confront her at her treasure trove; before Gadot gives them a whipping.

In order to catch Bishop, Hartley is pulled into the middle of a daring heist where he’s forced to partner with Booth. A tuxedo-clad Rock tells a red satin dress-wearing Gadot how this is going to wind up: “We both know that this whole thing is going to end with you in handcuffs.”

But most importantly as Hartley tells Bishop about his work with Booth: “We’re not work wives.”

It’s rich, there’s a lot of mouth-dropping stunts, exploding plank suspension bridges and wisecracks, and it will be interesting to see what kind of theatrical window, if any, Netflix gives Red Notice. The streamer’s previous big pic, Zack Snyder’s Army of the Dead, having one week, earning around $800,000 in its first weekend. Netflix currently has a deal to show off its movies with the No. 3 exhibitor stateside, Cinemark.

The Rawson Marshall Thurber-directed Red Notice drops on the streamer around the globe on November 12.