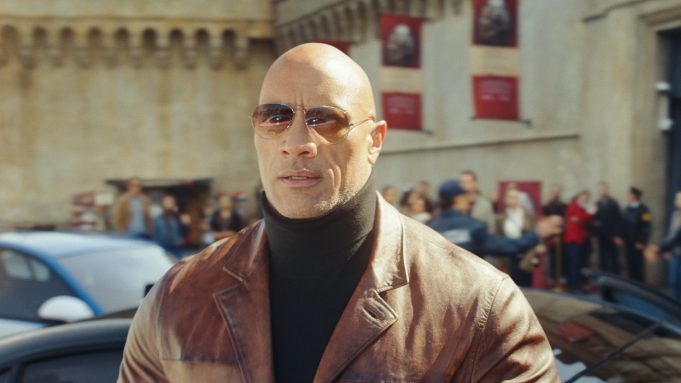 On Saturday, at Netflix’s global fan event Tudum, the streamer dropped the first clip from their massive $130M action blockbuster Red Notice starring Dwayne Johnson, Ryan Reynolds and Gal Gadot. The movie hits the service globally on Nov. 12, but, man, this one looks like it would be a blast in theaters sometime prior; no date revealed for that just yet.

In the feature written and directed by Rawson Marshall Thurber, Johnson is John Hartley, an FBI Special Agent who gets drawn into the hijinks of art thieves Nolan Booth (Ryan Reynolds) and Sarah Black (Gal Gadot).

In the clip, we see Johnson and Thurber’s characters sneaking into a space full of rare artifacts—where a bejeweled egg is on display—only to be confronted by Gadot’s Black.

“Looking for something specific or just browsing?” she asks. “You know, there was an easier way in, but I doubt very much you could have managed [to find] it.”

Black tells Hartley and Booth that she now has claimed two of the three eggs she’s been looking for. She will give them one last chance to take her up on her offer.

The three actors then proceed to engage in full-on combat, the clip ending with victory for Black, with both Hartley and Booth on the ground, in handcuffs.

Red Notice marks Johnson’s third collaboration with Thurber, on the heels of Central Intelligence (2016), the Warner Bros. action comedy in which he starred with Kevin Hart, and Skyscraper (2018), a thriller also starring Neve Campbell, Chin Han, Roland Møller and more. Ahead of the debut of today’s clip, Johnson was on hand to promote the film, calling it “a throwback to the epic adventure films we all grew up loving.”

Check out the new clip from Red Notice above.