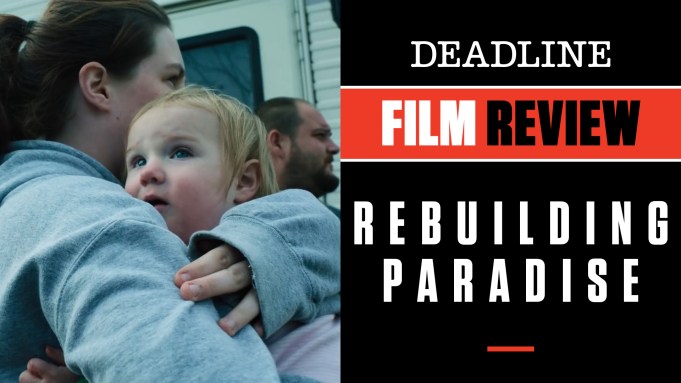 The disastrous wildfire that virtually destroyed the picturesque Northern California town of Paradise in November 2018 is an ongoing tragedy beyond human imagination. With 85 dead, 50,000 people displaced and 95% of the town’s structures completely burned down, it became the worst U.S. fire in at least a hundred years, and certainly the worst in California history. The aftermath looked like the effects of the atomic bomb that was dropped on Hiroshima at the end of WWII.

With National Geographic, director Ron Howard, who has some family connections of his own to Paradise, decided to tell the story of what happened during the Camp Fire and, just as important, what is continuing to happen as this is very much a recovery in progress. Thus, he sent his cameras and crew to Paradise to record the aftermath of this devastating event that changed the lives of so many in the 141-year-old town and the results of what happens when 150,000 acres go up in flames.

Paradise had a population of 26,500, and nearly two years later it is just 2,900. Its residents have suffered immensely through relocation woes, financial headaches, government bureaucracy, poisoned water, PTSD, and grief and loss due to the fire, which did $16 billion worth of destruction.

Howard, whose recent documentary career includes several music docus on the likes of Jay-Z, the Beatles and Luciano Pavarotti, wisely focuses on the human toll here as his cameras introduce us to a number of people. They include Michelle John, superintendent of schools; Woody Culleton, the former mayor; Matt Gates, a police officer; Zack and Brandon, two high school seniors who watched their dreams interrupted; Carly, the school psychologist; and others who put a human and humane face on this unspeakable nightmare. In a very compelling scene, we also see PG&E executives try to explain the unexplainable as it became clear that the power company was responsible when sparks from its wires set off the holocaust.

Although the logistics of what happened to Paradise are well-known, it is meeting the residents — each with different stories of survival and inspiration — that makes this film stand out. Howard has experience with fire, having directed 1991’s fictional Backdraft, but nothing compares with the real thing, and he knows how to frame the drama and tell a story in the documentary format just as well as he does working in narrative cinema.

The archival footage is exceptional and has the effect of putting us right in the center of this as it is happening. Although the filmmakers weren’t there at the time, the available footage they had to work with is remarkable. It also is difficult to make a film that really doesn’t quite have an ending yet. Those left behind still are trying to rebuild not only a semblance of where they lived but how they lived, and that is the real thrust of this penetrating look at an American tragedy. The “Welcome” sign you see as you enter town is still there, not complete but still standing. It says: “May you find Paradise to be all its name implies.”

Howard has found irony in that, but also humanity beyond.

Producers are Howard, Brian Grazer, Sara Bernstein, Xan Parker and Justin Wilkes. Nat Geo releases the film on Friday. Check out my video review with scenes from the film at the link above.

Do you plan to see Rebuilding Paradise? Let us know what you think.