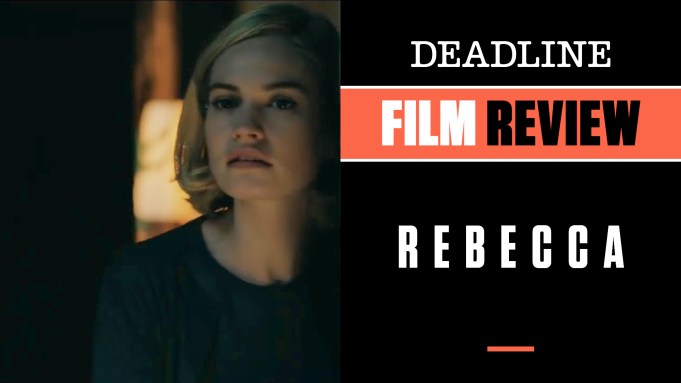 It always is daunting to attempt a remake of a classic, especially one that was directed by Alfred Hitchcock and represented the only Best Picture Oscar win of his career. So rather than dwelling on that imposing obstacle to overcome, Working Title, the production company responsible for the likes of Emma, Elizabeth, Pride & Prejudice and Mary Queen of Scots, says it isn’t remaking Sir Alfred’s masterpiece at all but going right back to the original source: Daphne deMaurier’s gothic novel published in 1938.

That often is what you hear from filmmakers taking on the memories of iconic films: ‘Oh, this is actually based on the book, not the movie.” That might be, but the 1940 Hitchcock film that garnered 11 Oscar nominations and won two adheres pretty closely to the book itself, despite censorship problems at the time. So does this version, coming from Netflix on the 80th anniversary of that moviem which still is remembered fondly for a cast including Laurence Olivier, Joan Fontaine and Judith Anderson.

All right, so it isn’t really fair to hold very modern actors at fault like Armie Hammer, who bravely takes on the Olivier role of Maxim deWinter, and Lily James as the woman who would become his second wife in the Fontaine part. If you haven’t seen or read Rebecca before, this version, which is deliciously fun in some ways by taking a modernish spin on the material, will have to do. Even if you’ve never heard of Rebecca, you probably have heard somewhere of the famous mansion at its center, the one known as Manderley — a gothic and gloomily sprawling abode where most of the action takes place and the ghost of deWinter’s first wife and title star dominates the proceedings.

It all opens up in sunny Monte Carlo, where deWinter is holding court long after the tragic “drowning” of his wife and where he meets a woman (James) he falls for. At the end of their time together in the South of France, he impulsively proposes and brings her back to Manderley in England, where the unsuspecting new Mrs. deWinter falls prey to gaslighting and bad vibes as she soon discovers she is competing with the memory of a woman who is dead but definitely not forgotten. That goes in particular for the head housekeeper Mrs. Danvers (Kristin Scott Thomas), who was so devoted to the late Rebecca that she can’t help but look at the new wife as a real downgrade, setting out to undermine her in initially subtle putdowns but increasingly more damaging ways, psychologically and otherwise.

Meanwhile, Maxim seems oblivious, even as his new bride seeks out answers to the mystery of Rebecca and her hold on Manderley. A key scene has her talked into throwing the kind of gala ball Rebecca was so known for, but it turns into a flat-out disaster after the new Mrs. makes a huge mistake by unknowingly appearing in one of Rebecca’s signature dresses — an event that could have been quelled by Danvers but plays out for all to see. The suspense ratchets up as new evidence emerges that contradicts the official accounts of Rebecca’s death, and the melodrama increases tenfold.

I admit it is hard to put in the rearview mirror what Hitch — in his first big Hollywood production that was produced by no less than David O. Selznick a year after his Gone with the Wind — was able to achieve in glorious black-and-white. However, this is a colorful new take with luscious locations, top-notch production and costume design, eye-catching cinematography and everything you could ask from a period enterprise like. Hammer is stoic, if a little stiff at times, but isn’t so much the center of attention; that prize is divided up among James, Thomas and the never-seen third female force-of-nature known as Rebecca in an unusual triangle involving the plight of three very different women. In this way, the new take indeed is more modern in its focus and nicely directed by none other than Ben Wheatley, whose offbeat filmography including Kill List, High Rise and Sightseers does not prepare you for the fact he has entered into Joe Wright territory and does a credible job.

The adaptation is from Jane Goldman, who started it, and Joe Shrapnel & Anna Waterhouse, who finished it up. Also in the cast with some juicy moments are the always-great Ann Dowd as American aristocrat Mrs. Van Hopper, the feisty character to whom James is assigned while in Monte Carlo, and Sam Riley as Jack Favell, the devious cousin of Rebecca. But it is Thomas who, as she so often does, takes the acting honors with a three-dimensional and entirely watchable Mrs. Danvers.

In a way this new movie version parallels the actual story deMaurier dreamed up. Here is a movie haunted by the memory of one of the great Hitchcock films that just would like to be taken on its own terms. If you can do that, then this probably will suit you just fine.

Working Title’s Tim Bevan and Eric Fellner and the producers. Netflix begins streaming it on October 21. Check out my video review with scenes from the film at the link above.

Do you plan to see Rebecca? Let us know what you think.