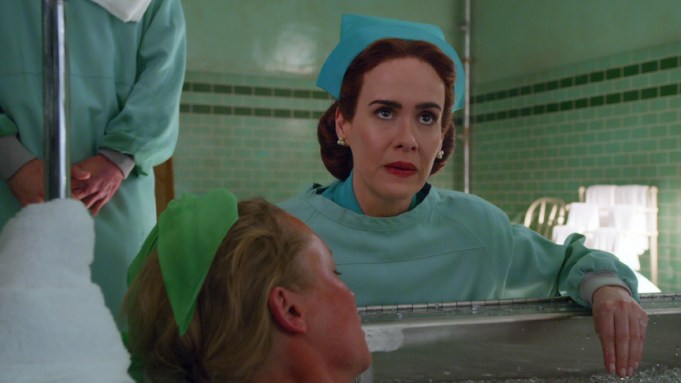 Sarah Paulson is one terrifying Nurse Ratched in Ryan Murphy and Ian Brennan’s One Flew Over the Cuckoo’s Nest origin series Ratched. Netflix has released the first trailer for the series, along with key art (below), that stars Paulson as a younger version of the diabolical nurse.

Per Netflix’s logline, in 1947, Mildred (Paulson) arrives in Northern California to seek employment at a leading psychiatric hospital where new and unsettling experiments have begun on the human mind. On a clandestine mission, Mildred presents herself as the perfect image of what a dedicated nurse should be, but the wheels are always turning and as she begins to infiltrate the mental health care system and those within it, Mildred’s stylish exterior belies a growing darkness that has long been smoldering within, revealing that true monsters are made, not born.

At today’s TCA panel, Paulson said that her Nurse Ratched “has plans to reunite with someone in the hospital…how that works out, you’ll see as it goes along.”

“People may be looking for Louise Fletcher, and they’re not going to find her, and I don’t want to upset them,” said the Emmy and Golden Globe winning actress.

While Paulson couldn’t expound on the full details on how Ratched came together, she relayed what she knew. “We had to get rights form estates, the real takeaway was how fast it happened. Michael Douglas had to get all the rights from the film and the characters.”

“The project originated as a spec script and it made its way to Ryan’s agent. Ryan read it and loved, and sent to me. Because of the nature of its prequel-ness and origin story, I felt a little more liberty and freedom to even think about doing it. It’s not something I developed,” added Paulson.

Originally when Paulson made the deal for the show, she was listed as producer. But on the first day of shooting, Murphy promoted Paulson to EP “‘You deserve it, it’s important for you and for everyone to see on the call sheet’ Ryan said” per Paulson, “He let me see early cuts, took my notes, he was incredibly generous and patient with me. I sent him emails with my thoughts, ideas, worries, things I wanted to put back in, he was amenable to it.”

Ratched premieres Friday, September 18 on Netflix. Check out the trailer above.