Continue to Deadline SKIP AD
You will be redirected back to your article in seconds
Skip to main content
January 9, 2019 1:24pm 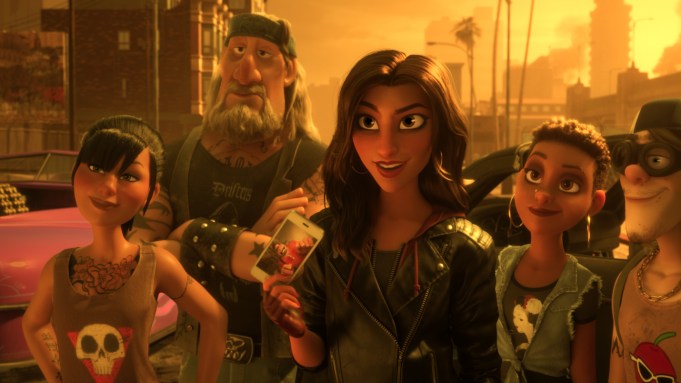 EXCLUSIVE: Every Disney princess worth her salt deserves a song, and in Phil Johnston and Rich Moore’s Ralph Breaks the Internet, Vanellope von Schweetz gets one of her own, as seen in the video above. With lyrics by Johnston and Tom McDougall, and music by Alan Menken, the song is unlike any heard in a Disney animated pic before. Titled “A Place Called Slaughter Race,” it refers to a new video game seen in the Disney sequel, a space in keeping with the rough-and-tumble world of Grand Theft Auto, where Sarah Silverman’s adorable character comes across Gal Gadot’s Shank.

Whereas Wreck-It Ralph, the original 2012 film, was about video game characters Wreck-It Ralph and Vanellope coming together as friends, the sequel presents a test to that relationship, with Slaughter Race acting as the wedge between them. A pastiche of a classic Broadway-style song—the “I want” song, where a character professes their innermost desires through song and dance —”A Place Called Slaughter Race” hits all the right notes, with remarkably apt and funny lyrics nodding to this very locale. “What can it be that calls me to this place today?/This lawless car ballet?/What can it be?” Vanellope sings. “Am I a baby pigeon sprouting wings to soar?/Was that a metaphor?/Hey, there’s a dollar store!”

To take a look at Vanellope’s interaction with an array of Disney princesses, old and new, and the song that inevitably follows, check out our exclusive clip.