Continue to Deadline SKIP AD
You will be redirected back to your article in seconds
Skip to main content
November 19, 2018 5:22pm 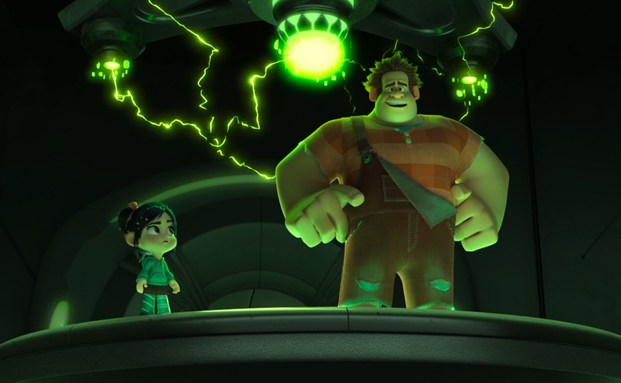 Wreck-It Ralph was an unexpected delight when it came out six years ago, and it immediately became another in a long line of animated box office hits for Disney. Inevitably that would indicate we were headed for a sequel, and now finally we have one. In the first film, video game villain Ralph (John C. Reilly) wreaked havoc on the arcade in which he lived, even though what he really longed for was to be a hero. In Ralph Breaks the Internet, the lovable lug’s sledgehammer approach to life hasn’t mellowed much as he takes his next quest onto the Internet, where he hopes to help out his good friend, the darling little Vanellope von Schweetz (Sarah Silverman), who is upset when the controller she needs to play her favorite Internet game, Sugar Rush, is out of commission and she has to get a new one.

What she discovers, with the help of Ralph, is the world of the net where everything seems to be available, and she indeed locates what she needs in an eBay auction. Simple. They dive into the bowels of the Internet, head to eBay and get the part. Both seem to believe that the idea is to drive up the numbers, and before you know it, they have bought this little game part for $27,000 and have no way to pay for it. As this drama plays out, they get separated — with Vanellope finding a new addiction in a game called Slaughter Race, featuring a bunch of tough drivers including Shank (Gal Gadot), who takes the girl under her wing. Meanwhile, Ralph goes to the energetic business whiz Yesss (Taraji P. Henson) as things begin to get a little desperate. This is all very fun stuff, even if in the final third it gets a little too frenetic, but what do you expect from Ralph?

The best sequence, and something worth the price of admission all by itself, is Vanellope’s encounter with all the Disney princesses as they give her lessons in how to become one of them. Yes, it is blatant cross-promotion for the brand, but it’s actually self-deprecating, and sharply written by Phil Johnston (who also directs with Rich Moore) and Pamela Ribon. So here we have Vanellope interacting with Pocahontas, Ariel, Moana, Cinderella, Snow White, Aurora, Jasmine Elsa, Anna, Rapunzel, Belle, Mulan – the whole lot of them – and most are voiced by the original stars who did the movies. As I say in my video review above, the voice work on this film could not be better, with Reilly perfectly taking Ralph to new levels and Silverman stealing every scene she’s in as Vanellope. Jane Lynch and Jack McBrayer are along in support, with Gadot and Henson really letting things cook with their individual characters.

This one can’t lose and should be a huge family event for the holidays. Producer is Clark Spencer. Disney releases it Wednesday.

Do you plan to see Ralph Breaks the Internet? Let us know what you think.