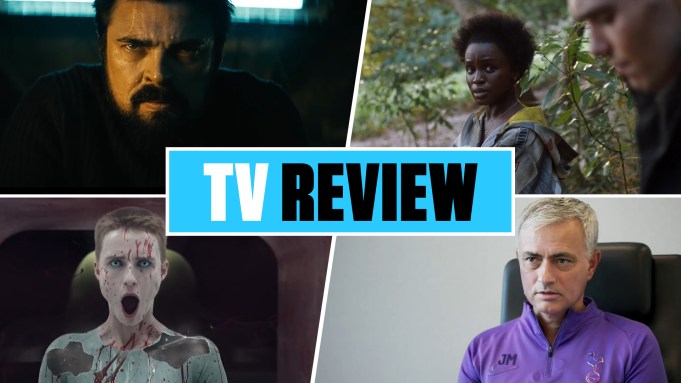 Even with all the twists, turns, halts and reopenings of this coronavirus pandemic, we are on the cusp of a new TV fall season, a season that will be familiar and simultaneously unlike any we have known before. Heading into the long Labor Day weekend, that fact presents an array of genres and formats among the contenders for the show you have to watch this week.

Having debuted with a trio of episodes August 31 on Amazon, All or Nothing: Tottenham Hotspur is perfectly timed to coincide with the start of the new Premier League season September 12.

This latest installment in the House of Bezos’ sports series, this All or Nothing will drop three more episodes of its BTS look at the Jose Mourinho managed football (soccer) club September 7. Chronicling the recent season that saw drama on and off the pitch, the Tom Hardy-narrated All or Nothing documentary series wraps up September 14 with its final three episodes as things kick off for Harry Kane and crew in the top division of the English football league.

Executive produced and partially directed by Ridley Scott, Raised By Wolves launched today on HBO Max. The big swing we’ve come to expect from the Blade Runner and Gladiator helmer revolves around two androids tasked with developing human children on a mysterious virgin planet as a religious war decimates Earth.

What would the world be like if Africa had conquered Europe 700 years ago? Peacock’s Noughts + Crosses provides a perspective on that world where the racial and cultural power structure is reversed, as you can see when the series from Mammoth Screen, Participant Media and Jay Z’s Roc Nation launches Friday. Having debuted on the BBC earlier this year, the series is based on Malorie Blackman’s script-flipping YA novels.

A tale of power, prejudice, rebellion and betrayal, the six-episode first season of Noughts + Crosses focuses on Sephy, portrayed by newcomer Masali Baduza, and Callum, played by Peaky Blinders’ Jack Rowan. The duo is divided by race but united by love. Sephy is a ‘Cross’, a member of the black ruling class and daughter of a prominent cabinet minister in the Albion of this alt-history. Callum is a ‘Nought’, a white member of the underclass who has been admitted to an elite military academy. Noughts + Crosses the TV series is written by Lydia Adetunji, Nathaniel Price and Rachel De-Lahay.

Already renewed for a third season, Amazon’s superhero satire series The Boys is back for Season 2 on September 4. There’s some Scientology by another name this time around, plus corporate PR spin, more Billy Joel tunes and more exploding heads than a Saturday night Scanners marathon.