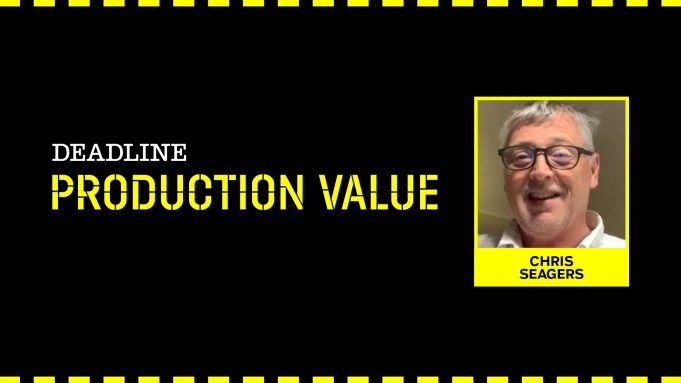 On Raised by Wolves, production designer Chris Seagers oversaw the creation of a primordial settlement inhabited by androids, who have recently crash-landed on the planet known as Kepler-22b.

A primary challenge, per Seagers, was to bring this world to life with “ridiculously short” prep time, at a moment when “there was no stage space available anywhere in the world.”

Limitations in stage space meant the shoot would have to take place on location, and while Hungary was looked at as a possible base for the show, Seagers and his collaborators ultimately decided on South Africa.

“I remember I got a call from Mark Huffam, the producer, to say, ‘You’re going to fly to South Africa on Sunday night. We need to hear from you by Wednesday. If you think we can do it, we’ll be on the plane on Thursday, and we’ve got to lock it down on Saturday.’ That’s how quickly it happened,” Seagers explains in the latest installment of Deadline’s Production Value video series. “Then, by Saturday, I was hiring people to start on the following Monday.”

Created by Aaron Guzikowski, and executive produced by Ridley Scott, Raised by Wolves centers on androids Father (Abubakar Salim) and Mother (Amanda Collin), who are tasked with raising human children on Kepler-22b after Earth is destroyed by a great war. Seagers would lay an aesthetic foundation for the HBO Max sci-fi drama as the production designer for its first two episodes, directed by Scott himself.

Heading into the shoot, Seagers was well aware of how difficult a big-budget sci-fi shoot in South Africa would be. “Building spaceships is hard wherever you are,” he says, and much more so when you’re “in the middle of nowhere.” Many other logistical challenges came part and parcel with the project, simply because its main set was “halfway up the mountain, and…a long way from Cape Town.”

Seagers was also keenly aware, though, of the production value that comes with shooting in South Africa, given its otherworldly backdrops, which perfectly suited the story at hand. “All those shots with all that rolling cloud coming over the top of the mountains, all of that was for real. That’s what happens when you have the arid desert terrain on one side of the mountain hitting the moist sea air coming from the other side,” he notes. “Everybody thought that that was Ridley’s sci-fi…but Ridley wanted to try to get a lot of that stuff in-camera.”

Given that the main environment in the first two episodes was “the big key” in selling the reality of Raised by Wolves, the designer and his team landscaped and otherwise “sculpted” a massive piece of terrain “to create this 360-degree set,” featuring crop circles, huge rock formations, the androids’ futuristic residence (based structurally on “an upside down jello mold”) and more.

While his construction team built spaceships “like boats”, Seagers also supervised the digging of a “very, very big hole” for the purposes of the story. “We could only go 25 feet deep because in South Africa, if you go any deeper, you have to get a mining license,” he shares. “So, we ended up building that for all of our immediate shots, and then we built another 80-foot high hole, in order to do all the stuff in the hole.”

Another interesting aspect of the show, for Seagers, was the creation of other futuristic tech. “It’s quite fun because Ridley really loves all this stuff. He’s very clued up on what’s going on at NASA, and all that kind of stuff,” says Seagers. “Not that he reads it all, but he’s just very attuned to what’s going on…Nine times out of 10, we will come from something that’s real.”

Remarkably, the story of Seagers’ career, and how he came to work on Raised by Wolves is just as interesting as the series itself.

During his Production Value interview, the designer shared that he was creatively engaged from an early age, though “it wasn’t something necessarily that ran in the family.” Around 1980, he attended art school in Ipswich, coming to think about a career in entertainment after a tutor presented a course on film and TV design, which wasn’t commonly found in universities at the time. Seager’s encounter with this tutor led him to quit art school and join the BBC, where he worked on “police shows and light entertainment” for around seven years.

Seagers met the acclaimed director (and brother of Ridley Scott)—who passed away in August of 2012, aged 68—around the time he served as art director on Steven Spielberg’s Saving Private Ryan. Seagers would find a career breakthrough, and a longtime collaboration with Tony Scott, following a subsequent art director gig on his 2001 film Spy Game. His window of opportunity came in the middle of production on another project, when Scott’s production designer quit and he was asked to step up. “Tony called me one day. I didn’t really know him. [I was] just a junior in the art department and he said, ‘Would you come to Casablanca with me and help me put this together?’” Seagers recalls. “Which I did.”

Following a six to eight week shoot, Seagers says Scott told him, “I really appreciate what you’ve done. I won’t forget that.” But admittedly, he brushed the comment off.

“I thought, ‘Ah, Hollywood.’ You know, I had a great time, I enjoyed it. Let’s go home and just move on,” the production designer says. “[But] lo and behold, about three months later, he called me and said, ‘I’ve got a little film called Man on Fire. Would you come and do it with me?’”

The rest, as they say, is history. Seagers would go on to work with the legendary director on four more films, including Domino, Deja Vu, The Taking of Pelham 123 and Unstoppable. “He was a great guy to work for,” Seagers notes, “an amazing man.”

While the designer crossed paths with Ridley Scott many times, during his years in “the Scott camp,” he never worked with him directly until 2016. “Ridley and Tony, although they’re brothers and they [ran] a number of companies together, they were pretty autonomous in their making of films. There was cross-pollination a lot, especially camera, sound. But design didn’t really cross,” Seagers explains. “Arthur [Max] was doing Ridley’s and I was doing Tony’s, and when we weren’t working, we were prepping, both of us.”

Seagers admits that when Tony Scott died, he “kind of panicked, because you wonder if you’re a one-trick pony.” Subsequently, though, he was hired for Transcendence, Fantastic Four and Deepwater Horizon. And then, there was 2017’s Alien: Covenant, which marked his first collaboration with Ridley Scott—putting him on the path toward Raised by Wolves.

For Seagers, one of the most interesting things about working in film and television is the fact that the entertainment industry is constantly in flux. “I love the technology, when you think of where we’ve come from and where we’re heading,” the designer says, specifically referencing the Volume VFX technology used recently on series like The Mandalorian. “It’s so exciting, and I think you just want to be going back 40 years to start all over again.”

Raised by Wolves was renewed for a second season, shortly after its premiere in September of last year.

Check out our entire conversation with Seagers above.