Continue to Deadline SKIP AD
You will be redirected back to your article in seconds
Skip to main content
July 20, 2020 6:36pm 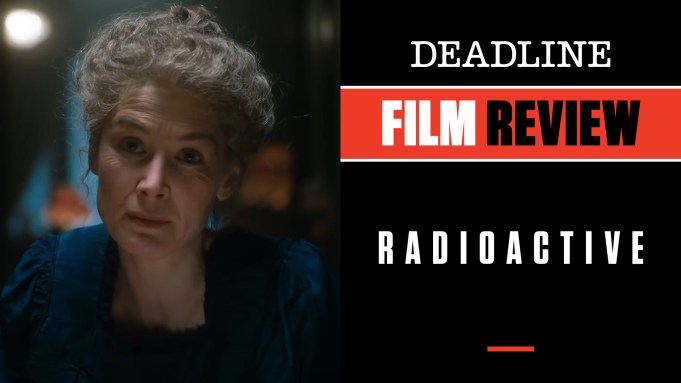 Hollywood has not seemed that interested in the life of two-time Nobel Prize winner Marie Curie aka Madame Curie, the groundbreaking scientist whose discoveries of radium and plutonium rocked the world and still do to this day, for better or worse. Greer Garson starred in the title role in 1943’s glossy Madame Curie opposite Walter Pidgeon as her husband and partner Pierre Curie. Both were nominated for Oscars among the film’s seven noms including Best Picture. But that has been the high-water mark on screen — until now.

Oscar-nominated director Marjane Satrapi (Persepolis) teams with screenwriter Jack Thorne (The Aeronauts) to bring Curie back to life vividly in a new biopic that resonates with her landmark professional achievements as the first woman to win a Nobel and the only person to date to win in two categories — chemistry and physics — and also with her personal life. That includes her marriage to Pierre, being the mother of two girls including Irene, another eventual Nobel winner, and a scandalous affair with a younger married man after the tragic death of her beloved spouse.

The film covers it all while also using an interesting device of employing several flash-forwards to demonstrate the side effects of her work with atoms and discovery of radioactivity, for good and bad, at different periods in history. This includes scenes set in a hospital in 1957 where a young boy gets hopeful treatment from the use of radiation on his cancer, an atomic test in 1961 that chillingly shows the effect of a nuclear bomb, the attack on Hiroshima in 1945 with an A-bomb in the last days of WWII, the positive effects of helping a million soldiers recover in WWI and the disaster at Chernobyl. Although these sequences might have had the effect of taking us out of the story at the different points, they don’t do that as much as adding an effective layer in showing the scope of what Curie, along with her husband, had brought forth in her lifetime, basically throwing the “stone in the pond” and not creating “the ripples.” Radium actually in her lifetime was celebrated as an exciting breakthrough in all walks of life, almost like a miracle discovery at the time.

The true power of the film, though, lies in the hands of Rosamund Pike, a startlingly fine actress who fiercely and movingly plays Curie in all her glory and heartbreak. In fact, the film’s most wrenching scene involves Curie hovering along over the embalmed body of her husband, who was killed after a freak accident in which he was run over by a horse-driven cart in the streets of Paris. Pike is just devastating in her raw grief in this scene, a towering piece of acting.

Based on the book Marie and Pierre Curie: A Tale of Love and Fallout by Lauren Redniss, this adaptation is as much about the career of one of the all-time greats as it is about the woman herself. In Pike’s hands, she is a full-blooded human being, warts and all, and the ultimate triumph of the film is in showing the intensity and determination that defined the life of this remarkable woman. Sam Riley exhibits great “chemistry” as Pierre, a man who shares Marie’s life in all aspects. An especially strong scene shows her fierce rebellion when he returns from accepting the Nobel Prize the committee only originally wanted to give to him (because of his sex),and her disgust and anger that she couldn’t be there. It has echoes of a similar scene in the Glenn Close pic The Wife, a film set much later but still showing what brilliant women had to deal with in order to be recognized as the true geniuses in these instances. Aneurin Barnard plays Paul, the younger man and associate of Pierre’s with whom she eventually falls into a headline-making affair. Anya Taylor-Joy is also very fine as daughter Irene.

The film has been handsomely shot by Oscar winner Anthony Dod Mantle (Slumdog Millionaire), with Spain and Budapest doubling for its largely period Parisian locations. Working Title’s Tim Bevan and Eric Fellner are producers along with Paul Webster. The Studiocanal/Amazon film begins streaming Friday on the latter’s service. The coronavirus pandemic sadly interfered with a planned wide UK theatrical run in the spring, but check this one out wherever you may find it. Also watch my video review with scenes from the film at the link above.

Do you plan to see Radioactive? Let us know what you think.