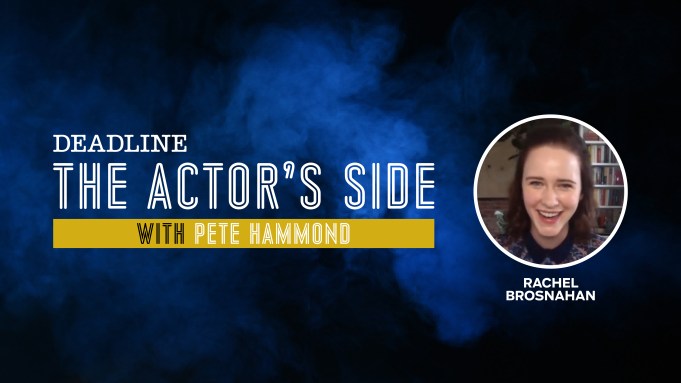 In 2018, Rachel Brosnahan came roaring out of the gate to win the Lead Actress in a Comedy Series Emmy for Amazon’s The Marvelous Mrs. Maisel, and the show itself made some history of its own winning eight Emmys overall. Brosnahan was nominated again for the second season, and now finds herself in a strong position to take home the gold for Season 3 as she has received her third consecutive nomination in the category, and the show itself leads all series with 20 nominations.

She joins me for this week’s edition of my Deadline video series The Actor’s Side, where the versatile performer gives insight into just what makes Midge such a complex and ever-evolving character to bring to life. She also talks about planning to attend the Emmys in her own home, the complicated journey of Mrs. Maisel, taking the show on the road, the third-season opener in which she performed a USO show and why they couldn’t do that today, learning the art of comedy, working opposite Guest Actor Emmy nominee Luke Kirby who plays Lenny Bruce, and also why Midge’s parenting skills have caused such an uproar by fans on the Internet.

We also talk about her movie debut in Michael Bay’s horror film The Unborn, a job she got when she was still in high school.  And from her first film to her latest, Brosnahan discusses for the first time I’m Your Woman, a new thriller from director Julia Hart and co-writer/producer Jordan Horowitz (La La Land) that is completely opposite of what she does on Maisel — see how she talks about the unique challenge in the upcoming film where much of the time she is working opposite a baby. No easy task, but Brosnahan has proven and tells us how she is always game for different and surprising roles.

To watch our conversation, and to hear The Actor’s Side of it all from Brosnahan, click on the video above.