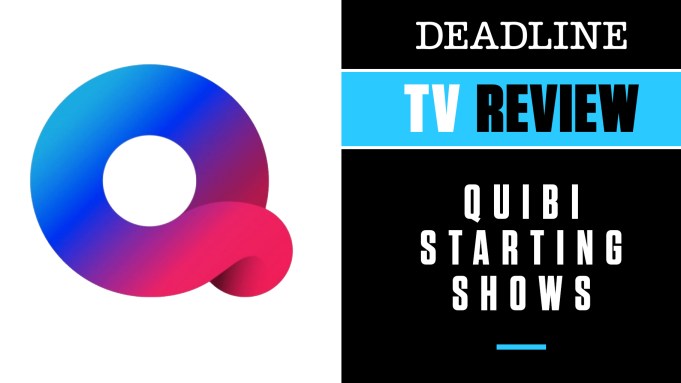 After months of hype and anticipation, Quibi is finally here and it’s a mixed bag, as our video review above says.

Launching today, Jeffery Katzenberg’s big-name-filled mobile platform was available for download in app stores with more than 20 shows of various genres ready for viewing. Taking this initial slate for the early effort it is, and the mitigating learning curve that will certainly come, some of the opening offering are much more worth watching than others, as we make clear in our review, which is shorter than the Quibi shows and movies.

Having raised $1.75 billion in funding and backed by the major studios, among the offerings today are Chrissy Teigen’s Chrissy’s Court, the Sophie Turner and Corey Hawkins fronted movie Survive, Chance the Rapper’s Punk’d revival, Most Dangerous Game with Liam Hemsworth and Christoph Waltz, and Lena Waite’s sneaker culture documentary You Ain’t Got These.

Understandably, shifting its strategy with the challenges of the coronavirus pandemic, Quibi will now have three episodes of every offering at launch and then a new one every day until each series or movie reaches the conclusion of its first season, so to speak. Every week will see more debuts, with the Lawrence Fishburne- and Stephan James-fronted #FREERAYSHAWN  and comedy Agua Donkeys coming on April 13, for instance.

Still, based exclusively on smartphones for the time being, the bite-sized premise of Quibi for an audience on the go seems somewhat moot in this time of quarantine and self-isolation.

Fact is, now offering a 90-day free trial and then going for $4.99 a month with ads and $7.99 without ads, the Meg Whitman-run service is premiering in a world where not too many of us are on the go — the clear exception being the heroic health care workers, first responders and the brave and kind souls in the warehouses, restaurants, grocery stores and delivery trucks keeping us all going (we thank them).

So, click on our review above and check out our take on Quibi, which both of us got a preview of at the Sundance Film Festival on a cold night back in January. For clarity, it should be noted that in our review Dino refers to Sasha Velour’s Quibi series as Smoke & Mirrors. It was an honest slip of the tongue; the show is actually entitled NightGowns, based on her live drag showcase in New York. Smoke & Mirrors is the name of Velour’s touring one-woman show.