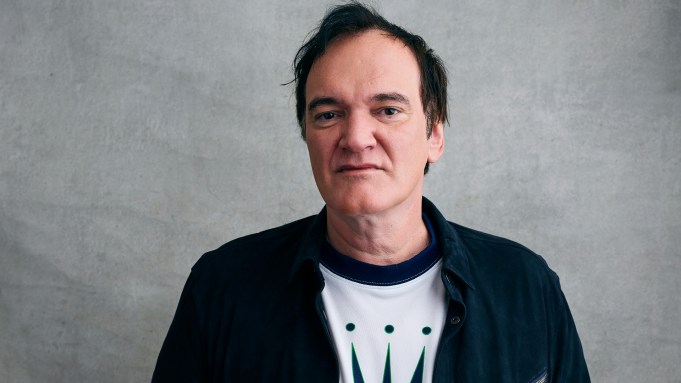 Nearly 30 years after he burst onto the movie scene with Reservoir Dogs, Quentin Tarantino remains one of the few breakout directors from the 1990s to still be working at the top end of the studio system. After a brief wobble in the late 2000s with Grindhouse, his recent films have been his most successful yet. Although it has yet to catch up with his Blaxploitation spaghetti Western Django Unchained, his ninth film, Once Upon a Time in Hollywood, gave him the biggest opening weekend of his career when it was released in July.

Set in 1969 and starring Leonardo DiCaprio as TV Western star Rick Dalton, Brad Pitt as his stuntman Cliff Booth, and Margot Robbie as actress Sharon Tate, the film follows two days in the life of all three before fast-forwarding to the fateful weekend of August 8-9, when Tate’s home was invaded by a murderous hippie cult later known as the Manson family.

At Deadline’s recent The Contenders New York awards-season event, Tarantino explained that, although the film dealt with a lot of his favorite themes, it was no more personal than his previous films. “I think all my movies are personal,” he said. “Even the more genre ones — deep inside of it, there’s a personal skeleton. But this one, I’d had this idea in my mind for a while. It was the longest I’d worked on something since Inglorious Basterds. I think sometime around Death Proof is where I came up with the initial starting point of who these characters could possibly be. And then, in between projects, I would work on it and I would push the rock up the hill a little bit until I’d get to a certain spot and then I would stop it and then do the next thing.”

Regarding the character of Dalton, Tarantino spoke of his interest in faded stars. “I’ve always been kind of fascinated by actors that had, y’know, had their day,” he said. “Who either had a hit TV show or a good supporting role in a movie that made them pop. And then for a while it looked like they could transfer that into becoming a leading man and even maybe a movie star. Sometimes it works and sometimes it doesn’t, and then you see where the career ends up settling down. Some of them went back to television in a big way — they were able to get another big series. Some of them, though, couldn’t really land a series of their own, or they did and it didn’t last long, and so they were playing the guest stars. I always thought that would be interesting to explore.”

The inspiration for Booth, he said, came from watching an older actor on one of his sets, sitting in costume with his personal stunt double. “They were sitting there on the set, both dressed identically,” he recalled. “I’m sitting across the set on an apple box, and then I look over and I see them smoking cigarettes, just shooting the sh*t, back and forth. And I saw their whole relationship. I remember thinking, ‘OK, you know, if ever some day I do a movie about making movies, I think that will be an interesting way to get into the story.’ ”

Finally, Tarantino addressed the issue of making Tate one of the film’s three main characters. “For most of us,” he said, “if you brought up the name Sharon Tate a year and a half ago, what would you think? Most people would think about the murder. They would think about her as the victim of this horrible crime — one of the ghastliest crimes of the 20th century. So one of the things I’m just really proud of is the fact that I wanted to show her alive, I wanted to show her as a person. I didn’t want to get her involved in a bunch of movie plots or anything like that. I actually liked the idea of just following her during the day as she does her errands — the thing that was robbed from her was living her life.

“And now, because the movie has played all around the world, when you bring up Sharon Tate, the murder isn’t the first thing people think of. And I’m very, very proud about that. And her family is very, very happy about that too.”

Check out the complete conversation with Deadline’s Awards Columnist Pete Hammond by clicking the link above.