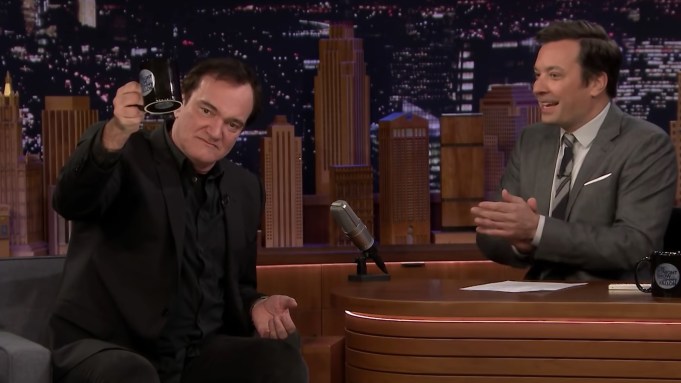 On last night’s The Tonight Show Starring Jimmy Fallon, Tarantino, promoting Once Upon A Time In Hollywood, told Fallon that residuals he received from playing an Elvis impersonator on a 1988 episode of The Golden Girls – a blink and you’ll miss it appearance – helped keep him afloat while making his classic 1992 caper film.

Tarantino said that his “unsuccessful acting career” briefly improved when his agent sent in a headshot of Tarantino for the bit part of an Elvis impersonator on the ’80s sitcom. Tarantino said he was in full rockabilly mode in those days anyway, usually sporting an Elvis pompadour and appropriate “hillbilly cat” attire.

Tarantino was chosen as one of a chorus of Elvis impersonators serenading Sophia (Estelle Getty) at her 1988 wedding (to Jack Gilford’s Max Weinstock). The two-part episode brought in residuals for years, as did its inclusion on a Best of Golden Girls compilation.

The $3,000 he made was enough to defray production costs on Reservoir Dogs and keep the project moving.

Watch the clip above, and here’s a screen grab of Tarantino’s big sitcom moment: