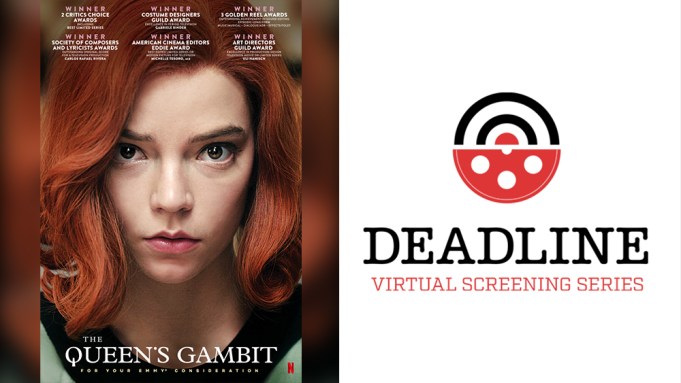 Netflix’s The Queen’s Gambit has swept the pre-Emmy awards circuit picking up nearly every trophy offered at various Guild and Critics ceremonies and instantly making it the show to beat, at least based on those precursor credentials, in Limited Series/Movie categories when Emmy voting time rolls around. Based on the 1983 novel by Walter Tevis (The Hustler, The Color of Money) the seven-part series follows the adventures of Beth Harmon, beginning in the late 1950s, as an orphan and onward as she takes her astonishing talent for chess into the competitive male-dominated world of the game, and becomes a transformative figure while battling her addictions and demons. Anya Taylor-Joy stars as the older version of Beth in the series written and directed by Scott Frank. Deadline’s Virtual Screening Series brought together a number of artisans to discuss their behind the scenes work on show in a wide ranging discussion which I moderated.

Costume Designer Binder described some of the real life inspirations for the various looks of Beth Harmon ranging from the Audrey Hepburn styles of the 50s to the Andy Warhol disciple Edie Sedgwick of the 60s. “We came somehow from the middle of the ’50s and went to the end of the ‘60s so that was really, really very lucky for the story because this end-of-’60s style feels very modern to us today and the ‘50s style feels a little bit you know, laid back,” she said in noting how the clothes helped move the plotline and time periods forward. “So, that supported absolutely what we wanted to tell with the story and let’s say I blew it up a bit but actually those years were perfect years for present-day revolutions.”

Tesoro talked about how editing techniques came in handy in elevating the various chess game sequences beyond the usual so that it could maintain a sense of suspense as well as be entertaining to watch, especially with so many games over the course of the seven episodes. “I think everyone was so worried about it being sexy and entertaining that everybody brought their ‘A’ game on every level. I mean, in terms of music helping us understand where the drama points where, when we use it, when we didn’t use it, and also I think just the way Scott Frank shot these tournaments,” she said. “I would say the tournaments in episode two are introductory to how the big play is and then maybe we return to it (in) episode seven. We’re turning to a lot of medium shots and shots on the board and we’re using a lot of coverage as points for effect. But I think mostly the tension between the actors and everybody watching them play and the music sort of really gives us some heightened drama there that maybe people didn’t expect.”

The art of sound editing is notoriously misunderstood by the average viewer, but as Stateman says it was key to making it all work as he actually compared it all to a Marvel movie about a woman with super powers. “Her power really was to go inside of herself and find this amazing ability to master this game which is a 500-year-old game, so it was kind of interesting and I think that the way Scott approaches these things and the way sound works in the Marvel world is that we kind of explore through sound and music and source music the kind of rhythms and the kind of patterns that Michelle is responsible for but we do it in a sonic way that brings believability,” he said of the collaboration between Frank and Tesoro and himself. “I mean, we don’t have to know how to play chess to enjoy The Queen’s Gambit, and in fact that was one of the criteria that Scott said at the very beginning. He said this is not a movie that’s going to teach people how to play chess, this is going to be a movie about a young woman’s journey and her power, and not only her power to play chess but her power to deal with drug abuse and alcohol and to deal with her coming of age as a woman.”

Another important element Stateman agrees was the music, and composer Rivera worked closely with both film and sound editors to get the desired effect but he approached it with terror after reading the original book. “I downloaded the novel by Walter Tevis and I read it like in a day or whatever. I just like really went through it, and that’s when I got really scared because the concept mentioned by Mr. Tevis about classical music, and he did make a correlation between classical music and the game, and he at some point mentioned it was like chamber music and there’s a moment in one of the previous episodes where Beth gets left behind at a college student’s house and she wakes up the next morning and in the show she listens to popular music of the time which helps establish the time and place, but in the novel she listens to Vivaldi,” he laughed describing the needs of a film adaptation vs what may have been in the book.

Rivera says he determined that in Beth’s own world in the orphanage her reality required piano, but when she looked up at the fantasy chess board on the ceiling his score went orchestral in demonstrating the difference of the way she saw things. And one other instrument that figured prominently was the flute. But Rivera revealed he had no intention of using that instrument so heavily until he did a little research and discovered that producer William Horberg actually played the flute. Based on experience, he surmised that if he put some flute in there, he would get quick approvals. “I’m being very honest, and I tell my students the same thing. It is about the people who approve the music, you have to play to what they like, and learn what they like. I found out he played flute and he loved that kind of stuff so as soon as it was not piano and I started adding instruments, the first instrument I added was flute and it started getting approvals. Excellent.”

To watch part of our Deadline Screening Series conversations with the artisans of The Queen’s Gambit, click on the link above.