Continue to Deadline SKIP AD
You will be redirected back to your article in seconds
Skip to main content
November 27, 2019 1:59pm
2Comments 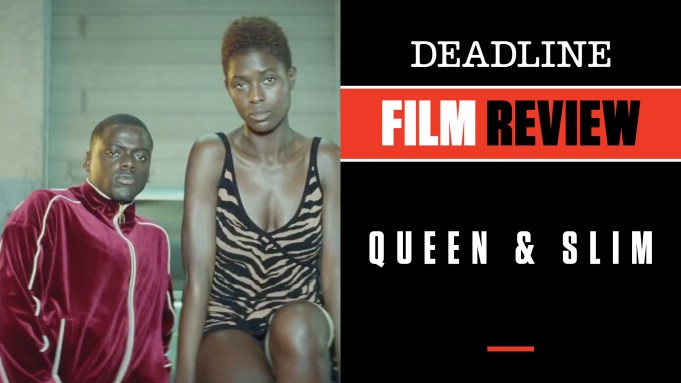 On the surface Melina Matsoukas’ feature debut, about a black couple on the run after a fatal traffic stop by a white police officer goes terribly awry, sounds like pretty explosive stuff ripped from the headlines. And yes, there is that, but this film has much more on its mind than leaning into just one event. That triggers everything, but at its core this is a touching love story, even as a character in the movie says, “a black Bonnie and Clyde” and its director creates empathy for the situation as set up in Lena Waithe’s screenplay in order to keep the focus, first and foremost, on the very human aspects of the story.

It all starts with a pretty bad dinner first date between Slim (Daniel Kaluuya) and a lawyer named Queen (Jodie Turner-Smith) that takes a tragic turn and gets much worse that either could ever expect when a belligerent white police officer (Sturgill Simpson) pulls their car over, The situation escalates to the point where Slim gets hold of the cop’s gun and kills him in self-defense after the cop took a shot at Queen, injuring her. All the while she has been recording the incident on her cell phone. Soon the pair feel they have no other choice but to go on the run, and thus a cross country trip begins with various stops and encounters along the way. They become the subjects of all-points bulletins and pursuits, but somehow elude capture even as the video of the incident goes viral and they become instantly recognizable. They also bond in a way that their disastrous date would never have predicted, and the pair become essentially two young lovers on the lam. The Bonnie and Clyde comparison has some credence as they quickly become folk heroes, rooted on by strangers who see society’s ills and the black/white divide perfectly spelled out in their predicament, although it might even be closer in past movie terms to Thelma And Louise, than Bonnie and Clyde. They aren’t criminals except by the circumstances of one unfortunate moment and the decision to run.

As is the case in many first films, the pace and tonal shifts don’t always serve the story which also becomes quite episodic as their treacherous journey to evade the law continues. This is a movie perhaps trying to have it all, social issues married to a love story, and it doesn’t always jibe. However it comes close enough thanks in large part to its lead actors. Kaluuya, so great in his Oscar-nominated turn in Get Out, is again impressive and expressive here as a victim of very bad white people. The real revelation however is newcomer Turner-Smith who grabs the screen and runs with it. She has a bright future indeed. Among the supporting cast who basically serve as quick encounters on the road, are Chloe Sevigny and Flea as a white couple who take them in, and Bokeem Woodbine, always great, as Uncle Earl in New Orleans which becomes one of their first destinations. It all builds to a suspenseful crescendo that is undeniably affecting.

Queen & Slim is bound to stir talk, maybe even a bit of controversy but it is a memorable, if flawed, movie that deserves a place at the table this Thanksgiving. Universal opens it today. Producers are Waithe, Matsoukas, Brad Weston, Andrew Coles, Pamela Abdy, Michelle Knudsen, and James Frey (who shares Story By credit with Waithe). Check out my video review at the link above with scenes from the film.

Do you plan to see Queen & Slim?  Let us know what you think.