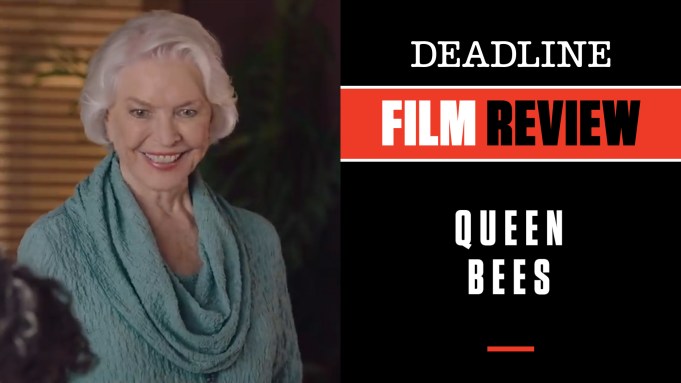 The combined age of the key cast of the new comedy Queen Bees is so astronomical I can’t count that high. Ellen Burstyn is 88, James Caan is 81, Ann-Margret is 80(!), Loretta Devine is 71, Jane Curtin is 73 and Christopher Lloyd is 82. All of these actors have had stellar, awards-laden careers, and this new film, which could be described as Mean Girls in a retirement home, proves they still have a lot of firepower left.

The older audience is a potent one for movies, if only Hollywood made movies for them — films where maybe they can relate to characters their own age in showing it is never too late (this film’s original title) to find life and love. The idea for this one actually came from producer Harrison Powell, who based it on the experience of his own family, a grandmother who found new love when she reluctantly went to live for a brief time in a retirement home. That is the plotline here as independent Helen (Burstyn) refuses her daughter Laura’s (Elizabeth Mitchell) advice in moving from her comfortable home to a facility for seniors. However, a kitchen accident sets part of her house on fire and she is convinced to move to the retirement community for only one month while repairs take place.

When she gets there she finds that despite the advanced age of the residents it is really no different than high school, ruled by different cliques including a bridge club that doesn’t believe in inclusivity. That group is run by Queen Bee Janet (Curtin), who rejects the idea of Helen joining their game which also includes Queen Bees Margot (Ann-Margret) and Sally (Loretta Devine). But when Sally’s partner becomes incapacitated she rallies support for Helen to join. It is friction between Helen and Janet from that moment on.

In addition to the problems of fitting into this universe, Helen is wooed by likable newbie Dan (Caan), who courts her and finally wins her over (though there are complications). The other major male resident spotlighted here is Arthur (Lloyd), a frisky senior who is slowly slipping into dementia, making for a poignant few scenes involving him.

There is no attempt at broad comedy or outlandish situations in the script by Donald Martin, or the expert direction of veteran Michael Lembeck. It is just the stuff of life as we grow older, presented in an entertaining and fun scenario that feels old fashioned, the kind of movie Hollywood once loved turning out; with this superb veteran cast it is very welcome indeed. Burstyn is still one of the best out there, and Ann-Margret has clearly stopped the clock. Devine is a delight here as Sally, a spirited resident who has her own battles with aging. Curtin is perfectly cast, as are Caan and Lloyd. French Stewart turns up as the manager of the place, and there’s nice work from Matthew Barnes as Peter, Helen’s sweet and concerned grandson. Queen Bees is well worth seeing, no matter what your age.

Producers are Fred Bernstein, Powell and Dominique Telson. Gravitas Ventures opens it in theaters Friday. Check out my video review above with scenes from the film.

Do you plan to see Queen Bees? Let us know what you think.