Continue to Deadline SKIP AD
You will be redirected back to your article in seconds
Skip to main content
July 24, 2018 1:52pm
4Comments 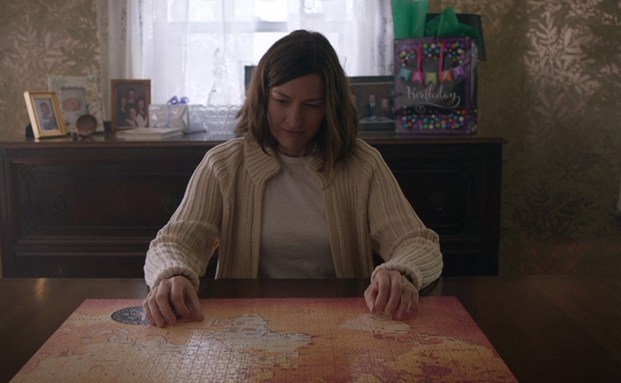 Agnes is a New York housewife with two teenage boys and a loving husband who works all day in an auto repair shop and expects dinner on the table when he gets home at night. He’s not a chauvinist; it’s just organic for him, the way he was brought up in a blue-collar neighborhood. As for Agnes, she is still living in her family home, used to being taken for granted and just goes about her ordered life as a good wife and mother. However, there’s something missing.

One day while celebrating her birthday — all alone — she sees a present from a friend. It’s a jigsaw puzzle. She opens it and soon finds she is extremely talented at quickly and accurately navigating all the parts. If only she could do the same for herself. That is the launching pad for Puzzle, an intimate and heartfelt drama from writers Oren Moverman and Polly Mann and director Marc Turtletaub. It features at its center a quietly powerful and moving performance from Kelly Macdonald (Boardwalk Empire) as Agnes that ranks as one of the year’s best and finally gives this great Scottish actress the leading role she so deserves.

As I say in my video review above, this is a movie that proceeds at its own pace, one with quiet moments that add up to so much more. It is simply a warm human drama about people picking up the pieces of their lives and trying to put them back together on a path to happiness — whether it is Agnes or Robert (Irrfan Khan) the “puzzler” she teams up with in jigsaw tournaments after answering an ad she spots in a game store in NYC that specializes in this stuff. Soon she finds herself lying about things to her family as she boards the train to the city a couple of times a week to practice with Robert, a recent divorcee whose wife also was his puzzle partner. He’s trying to fill the hole in his heart as well as his hobby, and Agnes becomes a part of putting it all back together for him.

Although their relationship enters into some dangerous territory as they go toward the championship tournament, the film focuses not only on this new part of Agnes’ life, where she finally is recognized for her own talents, but also back at home as she starts demonstrating the beginnings of a person discovering herself and a way into the rest of her life, one that won’t be dictated by anyone other than herself. There are no villains in this story, no heroes, just real people looking for something more.

It really is remarkable how cinematic Turtletaub is able to make putting 1,000-piece puzzles together. Who knew? Before seeing this movie I would have thought it might be the equivalent of making a movie about watching paint dry. And on another level it goes into unexpected places, not attempting to be the Rocky of jigsaw puzzle movies, but instead a journey for somewhat lonely individuals looking for answers.

Macdonald is simply luminous in a portrayal of a woman going through a midlife crisis and using jigsaw puzzles as the key to opening a new door. The great Bollywood star Khan (Life of Pi, The Lunchbox) is equally fine here as an inventor who had one great idea and now uses puzzling as a way to hide his own disappointment of a failed marriage and stalled career. David Denman is truly excellent as well as Louie, Agnes’ devoted but stuck-in-his-ways husband who can’t understand the changes taking place and just hopes the status quo will return to an ordered life. He might have the trickiest role as it could be easy to make him a stock villain of the piece, but you always understand where everyone in this situation is coming from.

The scenes from this marriage also have a real sense of authenticity. You believe them as a family unit, which includes the two boys nicely played by Austin Abrams and especially Bubba Weiler as a kid also looking to put a few pieces of his life together. Incidentally, Abrams gets some of the film’s funniest moments when he brings his new age vVegan/Buddhist girlfriend (Liv Hewson) home and announces that he plans to skip college for a year to go to India with her.

Do you plan to see Puzzle? Let us know what you think.