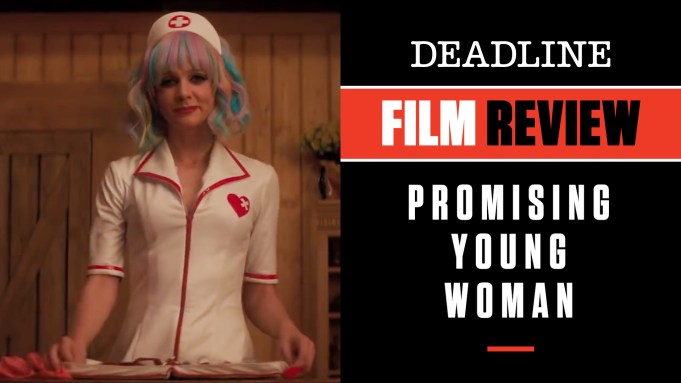 If there was ever any doubt, and I assure you there wasn’t, Carey Mulligan’s tour-de-force turn in Promising Young Woman cements her as one of the true acting greats of her, or anyone else’s, generation. Navigating an enormously tricky landscape as a 30-year-old woman haunted by a tragic event in her teenage years and now seeking unique methods of revenge, Mulligan is astonishing in what is the signature role of her career to date (and yes, that includes her Oscar-nominated breakthrough in An Education).

The Focus Features Christmas Day theatrical release was a sensation the minute it debuted at Sundance in January and also represents a startlingly assured feature film debut for actress Emerald Fennell behind the camera, writing and directing this twisty black comedy/suspense thriller.

Cassie (Mulligan) is seen at the film’s start in a completely drunken state at a dance club, where she gets help from an unsuspecting man named Jerry (Adam Brody), who offers to take her home. But then, sensing advantage of her apparent inebriated state, he attempts to have his way with her sexually. Little does he know this is all an act: She isn’t drunk, and actually sets up guys like Jerry, and later another named Neil (a very funny Christopher Mintz-Plasse) to turn the tables on men who take advantage of helpless women. Cassie is anything but helpless as she leads a double life with her nightclub “act” after hours and as a coffee shop employee working with good friend Gail (Laverne Cox) during the day.

Fennell turns the wheels of her story in deliberate manner to eventually reveal the reasons for Cassie’s need for revenge: retribution for a high school gang bang against her best friend Nina, an event that eventually destroyed that friend’s life. And it isn’t just random men she is targeting, as the on- screen “Chapters” indicate, she goes after women she implicates too, including classmate Alison (Alison Brie) and the dean (Connie Britton) of their school, who pushed the years-ago incident under the rug.

Is Cassie psychologically disturbed, or just a master of delayed revenge for the bad acts of boys who should have known better? She still lives at home with parents Susan (Jennifer Coolidge) and Stanley (Clancy Brown), who drop clues that maybe it is time for her to move out but also know her dreams of going to med school didn’t work out and that she might need time to get herself together in order to do that. They aren’t aware of her alter ego. The plot thickens with a suddenly surfacing videotape of long ago, a bachelor party for one of those classmates and a new relationship with another seemingly nice guy named Ryan (Bo Burnham) who also went to school with her all those years ago. The latter gives her the one hope for personal renewal in a sweet subplot where this sincere pediatrician courts her, even in goofy moments enticing her to join in lip-synching to Paris Hilton’s “Stars Are Blind” during a trip to the pharmacy.

It is a winding road for Cassie, not predictable in any way, and Fennell’s skill is balancing the tone among dark comedy, rom-com, psychological disturbance and suspense thriller a la Single White Female, all neatly tied up in a post-MeToo-era package that richly entertains as it has much to say about the dance between men and women — then and now. Fennell is blessed to have Mulligan traversing the highs and lows of a deeply fascinating character and never missing a beat or falling into any of the traps that could have destroyed her credibility or drifted into movie clichés. What a performance here.

Burnham, an actor-turned-filmmaker himself (Eighth Grade), also is terrific, as is the entire supporting ensemble including Cox, Brie, Britton and Alfred Molina, the latter very effective as an academic with a past involving Cassie. Chris Lowell is creepily fine as a key figure in her plot, as is Max Greenfield as one of his best buddies. Shout-out also to a great soundtrack and superb, brightly colored cinematography from Benjamin Kracun.

Producers are Margot Robbie, Ashley Fox, Tom Ackerley, Ben Browning, Josey McNamara and Fennell. Check out my video review with scenes from the film at the link above.

Do you plan to see Promising Young Woman? Let us know what you think.