Continue to Deadline SKIP AD
You will be redirected back to your article in seconds
Skip to main content
August 13, 2020 6:43pm
3Comments 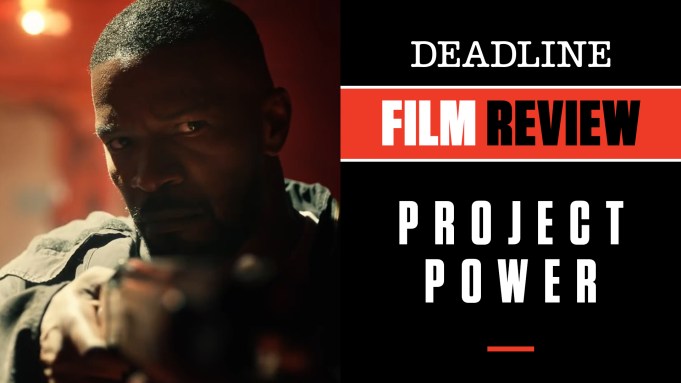 There obviously have been countless takes on the superhero formula, so what fresh spin could possibly be left? Debuting screenwriter Mattson Tomlin has come up with a clever twist on the tired genre. The writer whose next job was co-writing another comic book flick, the upcoming The Batman, asks the simple question: What if a pill could give you a specific superpower? Then he lays on the complications. It actually works, as far as it goes, and certainly provides a lot of fodder for action scenes and some intriguing characters.

Promoted by an evil, shady government organization, Teleios, there’s a new drug in town called Power, and it can provide various superhero abilities for the taker with just one swallow. The catch, though, is it’s only good for five minutes, so you better plan its use accordingly and quickly. The other catch is that it is kinda like playing Russian roulette in that the pill either will endow you with a fabulous superpower or it could kill you when you ingest it. A total crapshoot — but one that is tempting for any addict, in this case someone addicted to attaining power for their own purposes.

Frank (Joseph Gordon-Levitt) is a New Orleans cop who uses it in the line of duty, by teaming with Robin (Dominique Fishback), the drug-dealing teenager who also is an aspiring rapper, using the music to tell her own story throughout. Into the picture comes Art (Jamie Foxx), a somewhat secretive ex-soldier with a strong vendetta and personal reason to track down and do away with the powers behind Power. Although the relationship among this trio is a bit rocky and offbeat, they team in order to take charge of the business and get the pill out of the control of the bad forces at work using it in particularly unsavory ways. Tomlin says his inspirations were movies like Collateral and 8 Mile wrapped up in this particular genre. The latter, starring Eminem, most likely was a key influence since rap is so integral in telling this story through Robin’s POV.

Directors Henry Joost and Ariel Schulman deliver the requisite action scenes at a ramped-up pace with chases and shoot-outs frequently thrown in for good measure. In some ways, this would be the perfect vehicle for Quibi, in that puts its protagonists in peril every 10 minutes or so. This film goes for the nonstop approach as well, but it works nicely. It also helps that it is in the hands of a trio of appealing stars who manage to make us care what happens, especially Fishback, who is the heart and soul of this film. She’s terrific.

The supporting cast has good work from Courtney B. Vance as a police captain who might have other things in his holster; Colson Baker (aka Machine Gun Kelly) as Newt, Robin’s hot-wired cousin; Rodrigo Santora as Biggie, the main supplier; and Amy Landecker as Gardner, a brilliant scientist who is the brains behind Power. New Orleans, where all this is set in the course of a few hours, is another star in this firmament and shown off to great advantage.

Producers Eric Newman and Bryan Unkeless, the team behind Screen Arcade (Bright, Birds of Prey) are producers. Netflix begins streaming it on Friday. Check out my video review with scenes from the film at the link above.

Do you plan to see Project Power? Let us know what you think.