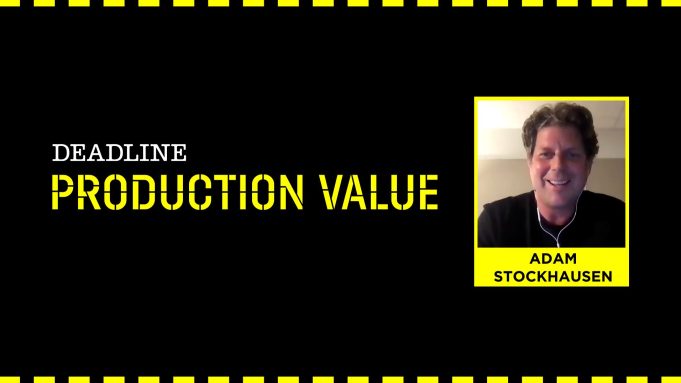 Production designer Adam Stockhausen admits that when he first read Wes Anderson’s script for The French Dispatch and felt its sense of “scale” and “scope,” his response was one of “slight panic.”

“Because…you know what you know about the timing and how long it’s going to take to get this together…the panic begins and it goes from there. And I’m joking, but not really,” he says in the latest installment of Deadline’s Production Value video series. “It took a minute to kind of say, ‘Okay, okay, okay. How do we dive in on this?’ And we ended up diving in from the beginning.”

The star-studded anthology film, set in an outpost of an American newspaper in the fictional 20th century French city of Ennui-sur-Blasé, brings to life a collection of stories published as part of its final issue. Its first chapter, “The Cycling Reporter,” introduces viewers to the area and its key landmarks, with its second, “The Concrete Masterpiece,” watching as a murderer (Benicio Del Toro) creates profoundly striking works of art while incarcerated. “Revisions to a Manifesto” centers on student protesters in pursuit of a revolution, with “The Private Dining Room of the Police Commissioner” following the kidnapping of the aforementioned official’s son. Then, there’s the epilogue “Obituary,” in which French Dispatch staffers mourn the passing of their editor.

While there were innumerable influences behind Anderson’s latest, including 1956 classic The Red Balloon and the works of Jacques Tati, the aesthetics of its world were perhaps most informed by the photography of Charles Marville, who captured many a Parisian quarter before it was either destroyed or revamped entirely. “There’s just a wealth of detail in them and they’re really beautiful, and they are descriptive of a city that, fragments of it still exist and echoes of it exist, but the whole totality of it isn’t there anymore,” says Stockhausen. “So, it gives a kind of spirit of the place.”

As was the case with films that Stockhausen had previously designed and art directed for Anderson, honing in on the right location to serve as an anchor for production proved key. This time around, the collaborators would find their home base within the commune of Angoulême in Southwest France. “If we were to take The French Dispatch and have shot it in New York, I live in New York and I’d love to be at home, but it would be a hundred times harder,” the designer says. “There’s a totality to the work of saying, if you’re shooting The Darjeeling Limited, shoot it on the train in India. If you’re shooting Moonrise Kingdom, shoot it on an island in the Northeast in the summertime and it’ll make it much harder to screw up, if everything is marching in the same direction.”

Much of production would take place within an abandoned felt factory found in Angoulême, which the designer helped transform “from scratch” into a full-fledged film studio. Stockhausen, who first collaborated with Anderson as the art director on 2007’s The Darjeeling Limited, notes that this was in keeping with the methods of a director who rarely tends to work within established studios. “Very often, we’re working in a place where that isn’t feasible,” he says, “so we kind of make our own.”

While some areas of the factory were turned into stages, others were transformed into offices and other kinds of “support space,” with another turned into the production’s construction mill. When shooting in the factory, Anderson and Stockhausen were always cognizant of existing architectural elements that they could bring into scenes, such that in many, “half of what you see” was built and half was “the bones” of the actual room.

Given how visually and narratively unique each section of The French Dispatch was, they would all naturally pose a “completely distinct” set of challenges. One of the most interesting to work on, from the designer’s perspective, was “The Concrete Masterpiece,” which required extensive construction of prison cell blocks, and also featured a sequence unlike any he and Anderson had previously undertaken. “There was…this really formally interesting part where we did the montage sequence of [the prisoner’s] painting traveling the world,” he notes. “Wes wanted to do it as a continuous dolly shot, moving through forced perspective paintings and tableaux vivant setups of the actors for all the different segments of that, and then shoot it all at the same time, moving through.”

Another complex and visually stimulating story to tackle was “Revisions to a Manifesto,” which saw him “tearing up” an exterior street location—”putting down sand and mountains of artificial cobblestones” before “building these sculptural elements of the barricades, one of which is all school chairs and desks and parts.” Another key component of that story was the Sans Blague café, which Stockhausen says is one of his “favorite parts” of the movie, because while the café itself was built on stage, all of the scenery in the background was craftily “recycled” from past production days. “It’s every little background building we made for the entire show that we saw out on the streets,” he says. “We did the café near the end of the schedule and kept saving all the pieces in piles, and just collaged them together.”

One of the greatest overall challenges for Stockhausen on the project was the enormous volume of sets he’d need to bring to life, some of which consisted partially of miniatures, and many of which were created for one single shot. He says that managing the complexity of the production and remaining one step ahead of what was being shot, as he prepared the next set, was a matter of both meticulous planning and “a lot of scrambling” around. “Through prep, we’re constantly going to locations, going to them again, going to them again, lining up with the camera. We’re mapping out exactly where things go…plotting it out so carefully that things do kind of click into place,” he explains. “That constantly rolling process of figuring it out and then checking in on it, and then checking in on it again, and then checking in on a third time with a camera, with some film to make sure, that’s sort of how we survive the rolling schedule of it all.”

Stockhausen is an Oscar winner and three-time nominee who began his work in theater, doing “every conceivable job” there is backstage after earning a Theater Arts degree from Marquette University. He’d find his way into work as a designer in the theater after earning an MFA from the Yale School of Drama, and eventually began to pursue day playing work in film, as well.

A key mentor figure in this arena was production designer Mark Friedberg, who hired him for Susan Stroman’s remake of The Producers and later introduced him to Anderson for Darjeeling. “Mark and I hit it off and I ended up working with him for years. So, I sort of turned around one day and noticed that I was working in film full time,” says Stockhausen. “Mark…really showed me the ropes in the business, but also a great figure in terms of his design spirit. Watching him work and watching the way he designed things was also a great inspiration.”

After working for a number of years with Friedberg as his art director, Stockhausen hit upon the break that would help launch his design career, when horror icon Wes Craven hired him for his 2010 film, My Soul to Take. “It was unexpected and unusual because I hadn’t designed a movie before,” he says, “and he took an incredible chance on me.”

In the years since, Stockhausen has also gone on to work with such acclaimed filmmakers as Steve McQueen (12 Years a Slave, Widows), Noah Baumbach (While We’re Young) and Steven Spielberg (Bridge of Spies, Ready Player One, West Side Story), cultivating memories on each project that he’s taken with him since. “I think that’s part of the great nature of working in this business and in the theater business, where the whole point of what you’re doing is to make these compressed, exceptional moments for the people putting it together and then obviously for the audience watching it,” he reflects. “By its nature, you’re creating these vivid experiences and vivid moments, so they do stick with you.”

Now, when Stockhausen watches a film he’s worked on, he not only experiences the movie in and of itself, but at the same time relives “every moment” in the journey of making it. “I remember the shooting day and what the weather was like, and everything that happened behind the scenes as we were getting each one of the shots together,” he says. “It comes like a flood.”

While Stockhausen is next set to design the fifth film in the Indiana Jones franchise, he reteamed with Anderson once again last fall for his upcoming film, Asteroid City, which he found to be remarkable. “Spain, where we were shooting, was incredibly special,” he says, “but also, the place Asteroid City had its own energy and suffused the whole project.”

While noting that Anderson is a “genius” any artist would want to work with, Stockhausen also speaks to the value he’s found in collaborating with the director repeatedly, in terms of the shorthand that’s now been established between the two. “So much of the collaborative process of designing theater or a movie is figuring out that communication and trying to pull out from you, ‘So, what is the story you’re trying to tell?’ or ‘How are you trying to tell this story? What does the story mean to you and how can I help you visually support this and express this?’ And…as you develop this more rich relationship with a collaborator, with a director, with a friend over these years, that process becomes instinctual,” he reflects. “As you get to know the person better and better, that effort can fall away and get repurposed to making things, and that’s really nice. The more that Wes and I work together, the faster and easier that communication becomes, so it has a great impact on what we’re able to accomplish.”

As he looks to the future, Stockhausen’s aspiration has less to do with any particular project, and more to do with maintaining relationships with those around him. “To me, the pleasure of this is really having this incredible good fortune to be able to work with your friends and tell these stories,” he says. “These incredible artists that I’ve been able to work with, I’m just so fortunate, and…the ability to do that is all I could ask for.”

Check out our entire conversation with Stockhausen above.