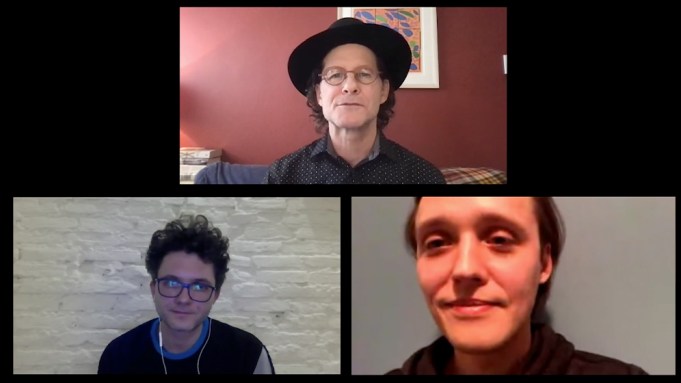 It’s December 31, 1999. At a Polish television station, a jaded TV presenter hosts a show counting down to the new millennium. In the midst of the live broadcast, 20-year-old Sebastian suddenly enters the studio. He’s armed with a gun and possibly explosives—his goal to hijack the airwaves.

That’s the setup for the suspenseful drama Prime Time, premiering in World Cinema Dramatic Competition at the Sundance Film Festival. Jakub Piątek makes his feature directorial debut with the film starring award-winning actor Bartosz Bielenia (Corpus Christi) as the desperate young hostage-taker. Piątek spent over a month rehearsing with his cast before the cameras rolled.

“It’s not common in Poland to rehearse a lot but if we couldn’t get to the characters—and rehearsals is the way—there won’t be a story and there won’t be a film there,” the director said during an appearance in the Deadline Sundance Studio. “We thought that it was crucial…I just like to improvise with actors so rehearsals is a better place to do it than the set.”

During one rehearsal actors got to work with a former police hostage negotiator.

“That was really a breakthrough,” Bielenia recalled. “We set up this whole situation. He entered the room as this negotiator and we spent just four hours talking with him. We really took a lot out of this experience.”

Bielenia said he worked extensively with Piątek to develop his character’s backstory.

“We knew almost everything about this person,” he noted. “We had this idea that our character…stuttered a lot [earlier] in his life but now he’s speaking normally. He went through the therapy. One of the points in this therapy is that you practice your breathing. So we thought about really conscious breathing during the whole performance.”

The actor said he’s wistful about Sundance being virtual this year.

“There was a little feeling of regret that we won’t see those beautiful mountains” in Utah, he admitted, “and we won’t spend this time there.”

For Piątek, any regret is softened by the realization that he got his first feature-length film into Sundance. He said he’s still finding it hard to believe.

“Is it true or not?” he said he keeps telling himself. “Maybe I was just dreaming.”

Prime Time premieres at Sundance today, at 12 PM PST. Watch the full conversation in the video above.