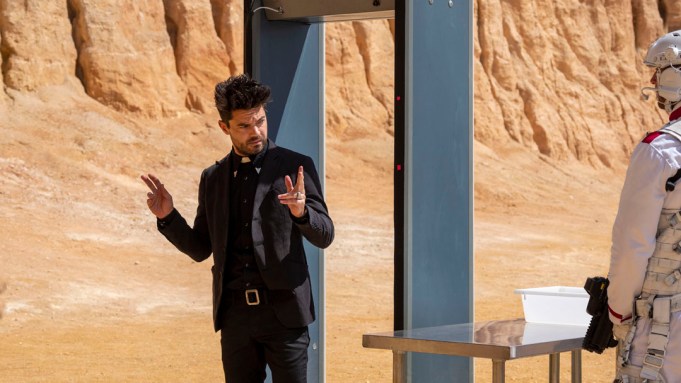 It’s the beginning of the end for Preacher in the just-released trailer for the fourth and final season of the AMC series from executive producers Sam Catlin (Breaking Bad) and Seth Rogen & Evan Goldberg (Neighbors, Pineapple Express, Superbad). Dominic Cooper is back as Jesse Custer, the West Texas preacher whose church and entire congregation in West Texas (in the aptly named town of Annville, no less) was flattened and killed when he became possessed by a supernatural entity (who turned out to be the offspring of an unnatural coupling between an angel and demon).

What ensues is his existential road trip, which has unfolded with the Biblical dread of Cormac McCarthy’s The Road and the surreal acid-trip tangents of Natural Born Killers —as well as a character named Arseface, which we’ assume is a first for any major American television series.

Custer’s bizarre quest across America to find God has taken some deranged twists and perverse turns over the past three seasons as he was joined by a sharp-shooting ex-girlfriend named Tulip (Ruth Negga); a boozy, Irish vampire named Cassidy (Joseph Gilgun) and Arseface (Ian Colletti), whose unfortunate nickname was earned by the puckered facial wound he suffered in a shotgun suicide attempt. The cast also includes Pip Torrens, Julie Ann Emery, Noah Taylor, Graham McTavish, Mark Harelik and Tyson Ritter.)

The synopsis for Season 4: “As the series inches closer to the finale, God’s endgame for the universe begins to click into place. Trapped between heavenly prophecies, hellish prisons, and all-out nuclear war, Jesse, Tulip, and Cassidy make their bloody way to the Most High. Whether they can reach God in time — or whether all this carnage is part of His divine plan — will soon be revealed as Preacher barrels towards the end of the world.”