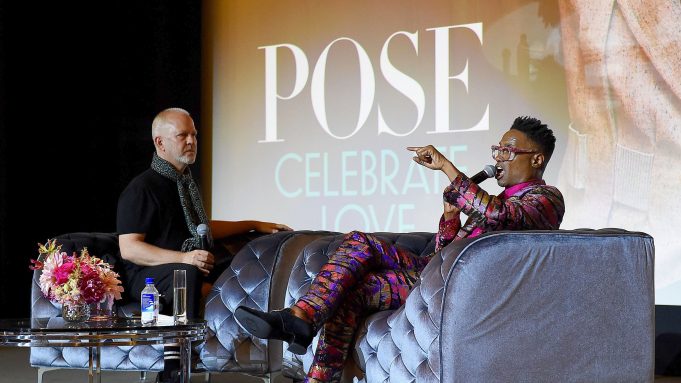 At the Pacific Design Center on Friday night, Pose co-creator Ryan Murphy appeared for a conversation in support of his Emmy-nominated series, explaining that in the initial stages of putting together the FX drama, one thought kept coming to mind: “There’s got to be something for Billy Porter in this show.”

Ultimately, there was, but it would take some time for Murphy to come to the character of Pray Tell. His first instinct, as he explained in conversation with Porter, was to cast the actor as a dance teacher. After all, “in the original pilot, the role of Pray Tell did not exist,” Murphy explained. “It was simply called ‘The Emcee,’ and he had two lines.”

Called in for the part of the dance teacher, Porter said to casting director Alexa L. Fogel, “There has to be something else for me, right? Because I lived through this era. It would benefit everybody if I was actually in the story that they’re talking about.”

As the actor explained during the Pose panel, his personal relationship to the story being told in Pose was a major draw. “I was there. It is my era. I moved to New York December 27th, 1990; Paris Is Burning was the first film, as a black, gay man, where I saw any image of myself in a pseudo-mainstream way,” he said.

In early conversations about the series, Porter shared his experience of the AIDS crisis, as someone who had lived through it, discussing his personal experience of survivor’s guilt. “Survivor’s guilt is a real thing. ‘Why am I still here? What is the point? What is my purpose?’” he said. “I didn’t know how, but I always knew that my art was going to be my way into a deeper kind of healing.”

Eventually, the role of Pray Tell was written specifically for Porter, and while directing the first two episodes of Season 1, Murphy observed “so much power” radiating from the actor. “There was so much there,” he said, “and I could tell that you felt you were letting things out for the first time.”

For Porter, who spent decades struggling as an openly gay black artist, shooting Pose was cathartic. “The first ball day sticks out really clearly to me because I was doing what I thought my television performance should be. I was trying to play Pray Tell and be smaller, be still, don’t be so crazy. [Murphy] walks in and is like, ‘Are you going to give me the sh*t? I need the sh*t. I need you. I need whatever you do,’” he recalled. “I had never said anything to him about it, but he knew instinctively. I was set free on that day, and I never turned back.”

In conversation with Murphy, Porter explained the difficulty he had in thinking of himself as a Hollywood leading man, after the homophobia and lack of opportunity he had experienced over the years. For a long time, the prospect of being a leading man on screen seemed to Porter like it would come with too high of a cost, requiring him to sacrifice everything of himself.

“20 years ago, I looked at the landscape, I looked at my life, I looked at what my choices were, and I made the choice to choose myself, choose my sanity over my fame, choose my authenticity over all else, and took every hit that comes with that,” Porter said. “Never did I imagine that I could and would be a first.”

Ultimately, though, Porter was. Earning his first Golden Globe and Emmy nominations this year for his turn in Pose, Porter is the first openly gay black man ever to have been nominated at the Emmys, in the category of Lead Actor in a Drama.

As the actor humbly recognized, though, none of this could have been possible without Murphy, who taught him through this journey “how to dream the impossible.”

Set in ‘80s New York, Pose juxtaposes several segments of society, focusing particularly on the LGBT community, and the world of ball culture. Competing for six Emmys in September, the FX drama will wrap up its second season on Tuesday, August 20. In June, the critically acclaimed series was renewed for a third season.

To hear more from Friday night’s conversation between Murphy and Porter, click above.