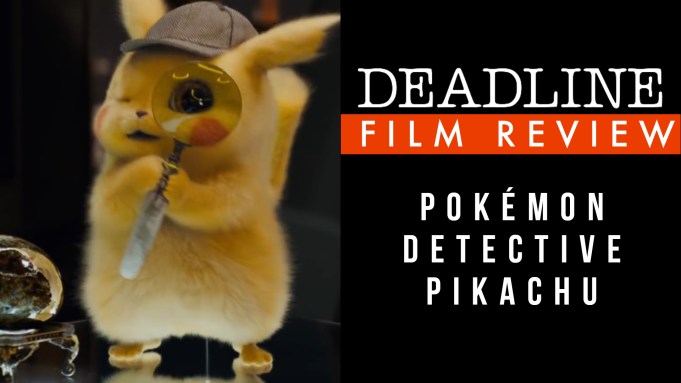 I will confess right off to being way out of the demo for the new live-action/CGI hybrid Pokémon Detective Pikachu. Pokémon‘s appeal escaped me. However, having laughed at some of the footage shown at CinemaCon last month, my hopes were a little higher than I might have expected. Alas, the end result — despite a nice college try by Ryan Reynolds to lift this into another category — is best reserved for anyone under 12 and Pokémon diehards.

That said, the CGI rendering of the title character is charming, and the film noirish atmosphere is amusing. Still the movie just gets too frenetic to really make this leap from the Japanese anime series and some 20 feature-length films into a crossover attraction for those not already on board.

Bringing Ryan Reynolds’ voice talents into the mix as a talking Pikachu, complete with Sherlock Holmes hat and attitude for miles, was a bright idea. This outing is based on the 2016 video game, the only previous instance where we see Pokémon characters talking. Here Reynolds does not get to go to lengths of Deadpool snap and coolness, due to PG constraints and the target audience, but he’s got some occasionally amusing lines and some sweet delivery as he goes on the case to help solve the mystery of the presumed death of his partner in a car accident that he survived. His partner also happened to be the human father of Tim Goodman (a bland Justice Smith), who engages him to help find out what happened. If Detective Pikachu survived, maybe dad did too.

This mystery leads them into the bowels of Ryme City in order to get clues. It is run by the villainous Howard Clifton (Bill Nighy) and his no-good son. Along the way there is interaction, some of it very funny, with Pokémon characters such as Bulbasaurs and Psyducks, and they are helped in their quest by aspiring intern journalist Lucy Stevens (Kathryn Newton).

Director Rob Letterman tries to keep this all flowing, and some of the set pieces work just fine in that regard. But this hybrid universe where humans and non-human creatures like those on display in Ryme City can co-exist has been done before to better effect in movies like Zootopia and especially the Toon Town escapades of Robert Zemeckis’ classic Who Framed Roger Rabbit to which this film just a much lesser pretender. It does however beat Melissa McCarthy’s very R-rated puppet show The Happytime Murders and the Will Smith/Alien teaming in Netflix’s dreary Bright. And hey, it has Reynolds, which is a big plus. If you are a kid or a Pokémon aficionado that is probably enough for now.

Five writers take credit for the film, including Letterman. Producers are Don McGowan, Mary Parent and Hidenaga Katakami. The Warner Bros/Legendary movie premiered in Japan ahead of its stateside release on Friday. Check out my video review with scene from the film included.

Do you plan to see Pokémon Detective Pikachu? Let us know what you think.