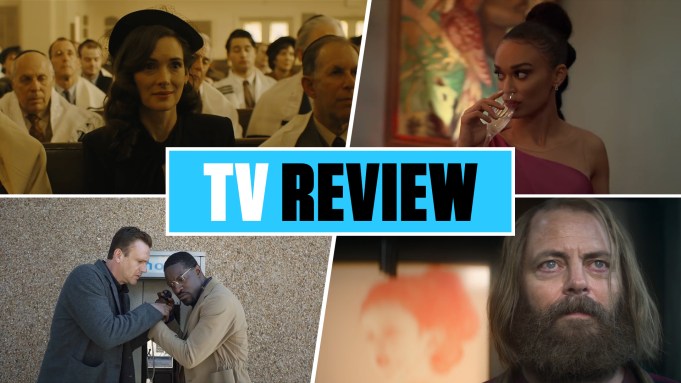 If you think that the only true drama on the small screen right now is the increasing zombie apocalypse of the Democrats’ Presidential primary race, this week’s look at the show you have to watch should prove otherwise.

As the contenders for Donald Trump’s job head toward the South Carolina primary this weekend and the massive multi-state delegate poaching of Super Tuesday on March 3, watch my video review above and get out a different sort of ballot for some very different candidates.

In reference to The Walking Dead, or at least its home on AMC, there’s the premiere of Jason Segal’s anthology series Dispatches From Elsewhere on March 1 and the February 28 launch of Netflix’s spy thriller Queen Sono. Alex Garland’s Devs begins its weekly launch on FX on Hulu on March 5, and March 16 sees the debut of the six-episode The Plot Against America on HBO.

Of course, like an election, you can’t pick the winner if you don’t participate. So, click on my review to see which one will be the show you have to watch.

Based on the late Philip Roth’s prophetic and alternate-history 2004 novel of the same name, The Plot Against America starring Morgan Spector, Winona Ryder, John Turturro, Anthony Boyle and Zoe Kazan focuses on a land of the free that could have very nearly stumbled under the boots of fascism in the early 1940s. The David Simon- and Ed Burns-produced miniseries tells the tale and trials of a working-class Jewish family in Newark, NJ, during the rise of aviation hero and isolationist Charles Lindbergh to the presidency and the initiation of anti-Semitic polices and laws in our then Great Depression-reeling nation.

Debuting tomorrow, Queen Sono may be Netflix’s first drama out of Africa, but it certainly won’t be the last. Fronted by Quantico vet Pearl Thusi, the six-episode spy thriller from South African comedian, actor and director Kagiso Lediga and EP Tamsin Andersson traverses the continent with its own tone and tale(s) to tell. Avengers: Age of Ultron actor Vuyo Dabula, Loyiso Madinga and Abigail Kubheka also star in the fast-paced show.