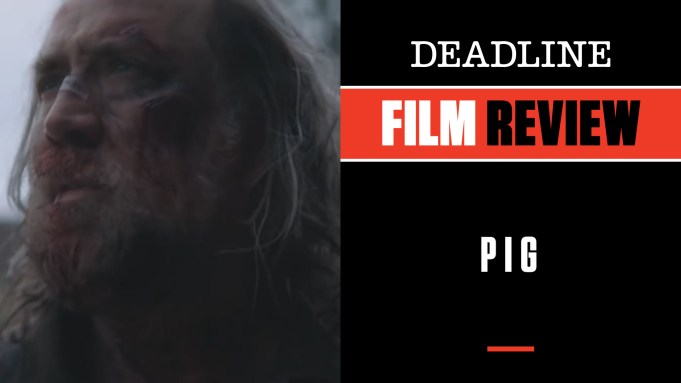 Nicolas Cage certainly continues with an eclectic career, one that includes an Oscar and a series of memorable performances from high drama to low comedy. He also appears to like to work a lot, and sometimes it seems might be more drawn to a paycheck than something worthy of his immense talent and range as an actor. The reason I know this is when I see a film like his latest, Pig, a movie that actually is worthy of his talent — and our time.

Although I have to say Pig is truly a sad film — a feeling of overwhelming sadness hanging over what at times is a remarkably funny, certainly biting and intriguing look at the high-end culinary world. But it also is a deep character study of a man mysteriously drawn to the life of a recluse in the backwoods of Oregon, a former top chef in Portland’s tony restaurant scene who dropped out 15 years ago for reasons not spelled out but whose only companion is his unnamed, truffle-hunting pig. We see their routine played out in the film’s quiet opening scenes until it is violently disrupted when an unknown person(s) break into his cabin, steal the pig, and beat up Cage’s character, Rob. Once he comes to, Rob’s sense of outrage and determination sets in as he heads in his beat-up truck on a rare sojourn into the city to find the culprit and retrieve his prized pig, but more importantly his true friend. He also never bothers to clean up his disheveled mountain man appearance or even wipe the blood off his face. We get the impression he doesn’t believe in baths.

Until hitting town the only human connection he has is with a sharp-talking young guy named Amir (a terrific Alex Wolff), who turns up weekly in his flashy yellow car to collect the latest truffle treasures from Rob, delicacies he sells to Portland’s top eateries. Their interactions, while limited, are surprisingly amusing, and he actually turns out to help in his quest to get back the pig — though it gets a bit complicated, especially when Amir’s father (a chilling but effective Adam Arkin), a mover and shaker in the rare foods universe, enters the picture and is at odds with his own son, or so it seems based on their awkward relationship. However, all roads in locating the pig seem to lead there.

Rob’s return to the scene of his former life elicits some fascinating encounters including with a slimy veteran chef (David Knell), and a guy (Darius Pierce) who leads a strange underground club of restaurant employees. The latter is an unsettling place for Rob, but we do get a clue as to his past status in the industry. On the same weekend as the release of Morgan Neville’s fascinating documentary on Anthony Bourdain, this fictional movie ironically offers some alternate food for thought, as it were, on the cutthroat competition among high-end restaurants and the complex lives of the unique personalities drawn to it.

Director Michael Sarnoski, who makes his feature helming debut and co-wrote the script with Vanessa Block, impressively keeps us engaged with this man, whose life-changing experience, breakdown or whatever you want to call it has led him to the edge of civilization, but who, with his truffle hunting, retains however small a connection to what made him such a seeming success in his previous life. Sarnoski also keeps Cage, refreshingly low-key throughout, in check and on course to creating an enigmatic but memorable human being willing to give up, however briefly, his solitary existence and flight from society in order to find his beloved pig. What he actually finds on this quest, sadly, does not renew our confidence in humanity or the world we live in, but does make you understand why Rob, for whatever reason, wants no part of it.

Add this one to Cage’s gallery of unforgettable characters, and chalk it up to a very promising debut for Sarnoski. Neon puts it in limited release Friday.

Check out my video review above with scenes from the movie. Do you plan to see Pig? Let us know what you think.